In order to answer this question, it’s important to keep in mind that there are two types of green tomatoes. First off, you’ve got your green heirlooms. As described in the full post on heirloom tomato characteristics, these are (almost) entirely green in color even when they’re ripe. A bit confusing if you’re not used to them, but I promise they taste fantastic and can absolutely safely be eaten raw with no risk of a belly ache.

The other type of green tomato is the unripe version of a regular red variety. If you came here because the tomato season ran out and you had to pick unripe tomatoes from your plant(s), that’s obviously what you’ve got on hand right now. These green tomatoes will be very firm and are usually more uniform in color.

You may have heard that the latter version, the unripe green tomato, isn’t safe to eat raw because it contains toxic alkaloids. This would make it unsafe to quick pickle, also known as refrigerator pickling. The good news? It’s a myth!

As mentioned in the New York Times, among other places, green tomatoes are SAFE to eat raw (although if you’re sensitive to acidic foods, take it easy). They are also SAFE to use for a quick pickle. They do contain alkaloids, but those are not toxic. Hooray!

Which Green Tomatoes are Best to Use?

Use ripe green heirloom tomatoes if you like slightly softer pickles that are a little more mellow in flavor. Aunt Ruby’s is my favorite, although this beefsteak variety is pretty large and would need to be chopped instead of sliced in order to fit it into most jars. It’s a splotchy green in color with a hint of yellow at the bottom when ripe.

The great thing about quick pickling green tomatoes is that it really doesn’t matter much what type of tomato you use. There will be some difference in flavor between unripe tomatoes vs heirloom tomatoes as well as between different tomato varieties, but all of them should turn out delicious.

Another great heirloom to consider is Green Zebra, which lends its name from its yellow-green striped appearance and is small enough to use sliced. This one’s a bit higher in acid than Aunt Ruby’s and so makes for a more robust tasting pickle.

Other green tomatoes you can grow at home for your quick pickles or may come across at your local farmer’s market include:

Red varieties that have not ripened yet are just unripe green tomatoes and they are definitely in the mix for pickles. If you’ve picked a big haul of unripe tomatoes or if you like your pickles quite firm, you’ll want to go for this unripe version.

Do remember that if you’re going to use unripe green tomatoes for your pickle, be sure to avoid the ones that are still very young and rock hard. They’re often too high in alkaloids to actually taste nice, even if they’re not toxic like some sources state.

Did you know? Another popular green member of the nightshade family that’s closely related to tomatoes is the tomatillo (also known as husk tomato). And yep… tomatillos are perfect for a quick pickle as well.

This is a recipe for quick pickles, also called refrigerator pickles. The quick pickle concept means you don’t have to worry about the whole shebang that comes with canning vegetables like tomatoes: no canning equipment is needed and the whole process is much quicker.

The only downside about quick pickles is that they aren’t shelf stable like canned goods. That’s why they’re also referred to as refrigerator pickles! No worries, though, because these pickles are so good there’s no way they’ll last until the end of their best-by date, which is around a month in the refrigerator.

Tip: Looking for other ways to preserve your harvest? Pickling is a great way to make vegetables last much longer, but there are many other methods you can consider as well. Why not dehydrate them, for example, like with this salt & vinegar cucumber chips recipe?

How to Use Green Tomato Pickles

Aside from eating them straight out of the jar (guilty!), what can you do with green tomato pickles? As you can imagine, pickled green tomato has loads of different uses. They taste fantastic in almost any recipe that calls for pickles.

Why not consider using green pickled tomatoes for:

Tip: Still got green tomatoes left after making your pickle? There are quite a few other things you can do with them, so you won’t have to worry about your harvest going to waste. Try some yummy fried green tomato, a typical Southern dish, if you don’t want to pickle all of your tomatoes.

To make our quick pickled green tomatoes, we’ll be using pretty much the same ingredients as if we were going to can them: 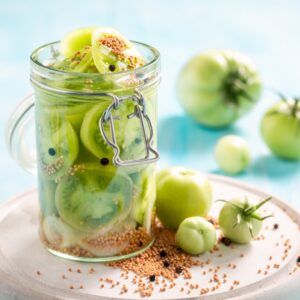 Green tomatoes are perfect for pickling. This recipe is for quick pickles (refrigerator pickles) rather than canning with a water bath or pressure cooker. They will not be as shelf stable but they will certainly be as delicious.
No ratings yet
Print Recipe Pin Recipe
Prep Time 30 mins
Cook Time 10 mins
Servings 7 Pints
Calories 132
Author dorothy stainbrook

**Note that the nutrition facts are for a whole pint**

Calories: 132kcalCarbohydrates: 23gProtein: 5gFat: 2gSaturated Fat: 0.2gPolyunsaturated Fat: 0.5gMonounsaturated Fat: 1gSodium: 63mgPotassium: 773mgFiber: 5gSugar: 15gVitamin A: 2188IUVitamin C: 77mgCalcium: 142mgIron: 4mg
Did you make this recipe?If you tried this recipe, please give it a 5-star rating! To do this, just click on the stars above. And don’t forget to tag me at @dorothy_stainbrook_heathglen, if you share a picture on Instagram! You can also tag me at #heathglen!
Click here to cancel reply.

That sounds really good! I barely have any tomatoes again, but maybe they'll start coming in. Probably not, they are getting so hot I have tomato sauce on the vine.

Yes, parts of the country (and world) are getting so hot that it may indeed impact tomato growth. As I understand it the perfect temperature for tomato growth is 75 degrees F. Haven’t seen many 75 degree days here in Minnesota this summer!