Hoppin John is a classic southern/cajun dish traditionally served on New Years Day to encourage good fortune and wealth throughout the upcoming year.  Well, good fortune is certainly yours during dinner as you savor this delicious stew! Bonus points that it is compliant with slow carb diets if you just exclude the rice.

Thought to have originated in the Carolinas, most historians agree that Hoppin John is an American dish with African/French/Caribbean roots.

Southern cooks have come up with many variations of this traditional dish, but the traditional dish contains three main ingredients: black-eyed peas, smokey pork (often bacon), and some kind of heat.

Rice is often added to Hoppin John, but I have excluded it in my recipe for two reasons:

Where did the Crazy Name Come From?

Theories abound regarding how this dish got its quirky name.  The most popular theories include:

I’m going with the greeting of a guest saying “Hop in, John”.

Some of the ingredients in Hoppin John are said to bring about good luck in the New Year. The three ingredients most associated with good luck are summarized as follows:

Beyond the ingredients, there are a range of traditions that enhance your luck (and are fun to do).

One custom is to bury a shiny dime among the black-eyed peas before serving.  Whoever gets the coin in his or her portion is assured good luck throughout the whole year.

Another tradition in some parts of the South is to count the number of peas in your serving to predict the amount of wealth you will have for the coming year.

And finally, if you leave three (3) peas on your plate when you are finished eating, then your New Year will be filled with luck, wealth, AND romance.

I love trying these old classic dishes with a background of tradition, especially if they taste good.  And this one does.  No mushy mound of rice and peas here!

What to Serve with Hoppin John

I also used both ham hocks and bacon in my recipe, a recipe which was inspired by Emeril, the king of southern cooking in my mind.  The ham hocks were simmered in the stew to add flavor and fat, and the bacon was added at the end for some crispness on top of the stew.

In my version, the smoked chipotle spice mix brought the heat, but your favorite chile pepper spice mix will work.

The best dessert to go with any Southern dish (in my opinion) is old fashioned banana pudding. Such a sweet way to bring in the New Year! 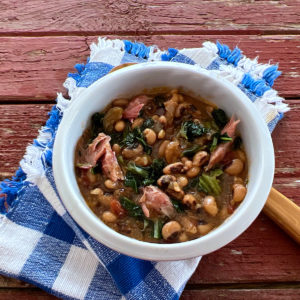 Hoppin John is a traditional Southern stew enjoyed on New Year’s Day for good luck in the upcoming year. This version is made in an instant-pot and does not include rice because it is a slow carb version. You won’t miss the rice at all! Serve with collard greens.
5 from 3 votes
Print Recipe Pin Recipe
Prep Time 20 mins
Cook Time 40 mins
Servings 4
Calories 354
Author Dorothy Stainbrook

NOTE:  In my version, the smoked chipotle spice mix brought the heat, but your favorite chile pepper spice mix will work.

Calories: 354kcalCarbohydrates: 28gProtein: 23gFat: 17gSaturated Fat: 6gPolyunsaturated Fat: 2gMonounsaturated Fat: 7gTrans Fat: 1gCholesterol: 57mgSodium: 240mgPotassium: 775mgFiber: 9gSugar: 7gVitamin A: 2775IUVitamin C: 29mgCalcium: 181mgIron: 4mg
Did you make this recipe?If you tried this recipe, please give it a 5-star rating! To do this, just click on the stars above. And don’t forget to tag me at @dorothy_stainbrook_heathglen, if you share a picture on Instagram! You can also tag me at #heathglen!

What is the carb/calorie count for this recipe? Made it for New Year but think we'll have it often.