This traditional version of pozole rojo is a luscious slow-cooked stew made with pork, hominy, Mexican spices, and a blend of mild to moderate chile peppers. It is simple to make without a lot of hand-on time, but to develop the full flavors it should be simmered for a couple of hours. Make a big batch as it gets better every day!

Jump to: Recipe | What is Pozole? | Low Carb? | Is Pozole a Celebration Recipe? | Substitutions | Common Questions

What is Pozole (Posole)?

Pozole is one of Mexico’s oldest soups or stews, said to date back to Aztec times. There are now a ton of different versions but old-school pozole rojo has a smoky red stock spiced with pureed chile peppers, slow cooked with pork and hominy (whole white corn kernels that have been acidified to soften and plump up the kernels).

It is essentially an earthy, aromatic pork and hominy stew that is slow cooked in very large batches. It’s simple, so the ingredients are quite important.

The hominy provides a soft chewy texture, the broth is complex and should include pork with bones in addition to some pork with fat. For example the pork might include pigs’ feet, pork shanks and or pork shoulder.

The hominy part of pozole is quite starchy and definitely not low carb.

Is Pozole a Celebration Recipe?

Pozole is often thought of as a rural celebration food, often seen at fiestas, but a more casual celebration dish than mole or tamales. One friend from Mexico told me it was sometimes referred to as “drunken food”, as it was often enjoyed at fiestas that had plenty of drink and merriment.

While in the U.S. we think of stews as cold weather fare, in Mexico pozole is served whenever you need to feed a crowd or when there is something special going on.

Sometimes pozole is even considered the dish to celebrate the week’s end, which is Thursday.

While the broth and hominy are the base of the soup, it is the garnishes that really bring pozole to life. Typically the soup is served in bowls at the table and additional plates are heaped with garnishes. Some say pozole is “all about the garnishes”.

The garnishes vary but typical garnishes found on a Mexican table might include:

Pozole Rojo vs Verde vs Blanco

Red pork and hominy stew (rojo) is the classic pozole, and it is made with a mix of chile peppers. The pepper varieties can vary but it should include smoky anchos or pasillas in the mix.

Pozole verde is usually made with chicken instead of pork and includes poblanos (poblano chile peppers are the fresh peppers that become anchos once they are smoked) and tomatillos.

Pozole blanco does not have red or green chiles to give it the color that the other ones do. It is sometimes considered the most “pure” of the three, with the broth becoming the most important part. It is often served with a spicy salsa on the side for those that want to spice it up a bit.

Most recipes for pozole rojo use the mildly spiced ancho and guajillo peppers. The verde and the blanco is even less spicy, with the verde using mild poblanos and the blanco foregoing the chile peppers all together.

Some cooks will add chile de arbol to the broth, if they want to increase the heat level. Others will just keep it mildly flavored with chiles and provide hot sauces on the table for individual preferences.

In our recipe we used a mix of anchos, pasillas, and guajillo peppers and then served it with a range of hot sauces on the table.  It is also common to include arból chiles instead of hot sauce to increase the heat level.

Can this be made in an instant pot?

I have not made it in an instant pot, mostly because the traditional way is to permeate the house with the smells of something special. I don’t see any reason why it couldn’t be made in an instant pot however. Just rehydrate the chiles and make the rojo sauce first and then add that with the rest of the ingredients to the instant pot and set it for “stew”.

How long will it keep?

It will easily keep in the refrigerator for a week, and in fact gets better with each reheating. Just reheat the whole stew until hot and serve the garnishes fresh. 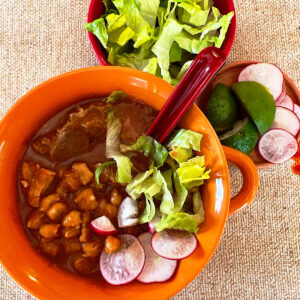 Calories: 365kcalCarbohydrates: 43gProtein: 25gFat: 10gSaturated Fat: 3gPolyunsaturated Fat: 2gMonounsaturated Fat: 4gCholesterol: 70mgSodium: 1882mgPotassium: 600mgFiber: 8gSugar: 8gVitamin A: 335IUVitamin C: 9mgCalcium: 67mgIron: 4mg
Did you make this recipe?If you tried this recipe, please give it a 5-star rating! To do this, just click on the stars above. And don’t forget to tag me at @dorothy_stainbrook_heathglen, if you share a picture on Instagram! You can also tag me at #heathglen!
Click here to cancel reply.

Do we need to seed the peppers before they get blended?

We did not take the seeds out of the dried peppers. A lot of them came out however in the rehydration process and in handling. I think if you have the time I would use your hands to scrape out some of the seeds from the softened rehydrated peppers before blending. It doesn’t hurt to have them in but it will make it more spicy and maybe a little more bitter.