Pozole (aka Posole) is such a flavor-filled, rib-sticking, satiating meal that it is difficult to be convinced that it has a place on any kind of diet.  All of the ingredients in this Pozolillo de Garbanzo however are compliant with the slow carb diet (aka 4-hour body) and can work for low carb lifestyles.

Traditional pork pozole is a slow cooked pork stew with hominy, chile peppers and aromatics. While the traditional version is not high in calories, the hominy is essentially white corn kernels and is fairly high in starch/carbs.

This version of the Mexican pork and hominy stew is a classic red pozole, which I learned from a wonderful hispanic woman from the Bajío region of Mexico. While it is fairly simple, it does take some time to come together.

It is usually made in large batches for crowds and celebrations.

Why are Beans Compliant with a Slow Carb Diet?

Beans and legumes are allowed on Tim Feriss’s slow carb diet, but after working with many clients on this diet I have found that it is fairly easy for people to stall out their weight loss by overdoing it on bean/legume consumption.

Based on various podcasts or interviews of Ferriss, I have come to the conclusion that he included beans for two reasons:

1) they are indeed a carb but they don’t spike blood sugar like the refined carbs do, and
2) when you eat mainly protein and vegetables, it is common to get fatigued at first.  Beans and legumes offer a slow carb way to offset fatigue.

If you are doing a vegetarian form of slow carb, beans and legumes are going to be very important.  The garbanzo beans in the Pozole offer a lot more protein and slow carbs than hominy will and that’s why they were substituted in.

Beans as a Global Staple for Protein

So are beans necessary to a slow carb lifestyle?  They can certainly be a benefit if other sources of protein are unavailable or too expensive.

I like to approach the health aspect of beans and legumes using one of the key findings of a world-wide study on longevity funded by National Geographic, called the Blue Zones Project.

Dan Buettner, team leader of the Blue Zones project, and his team came up with 5 geographic areas of the world that had the longest-lived (and healthiest) people.  The five geographic regions included:

After identifying these areas, the Buettner team went on to analyze what characteristics the five areas shared to try and tease out why the people lived so long and why they were relatively free of disease.

I will list the characteristics below, but the interesting thing to me with respect to diet was that the overall diets of these areas were very different from each other.  The only dietary ingredient that each region shared was a cup of beans a day.

So, if you want to know more about this fascinating project, Dan Buettner has written a series of books about the specific findings on Blue Zones. One of the books is a Blue Zones meal plan/cookbook.

Pozole is a very popular soup dish, traditionally made with hominy. Hominy is dried field corn (not sweet corn) that has gone through a process of removing the hulls and then plumping up the inner kernels.

The texture of hominy is a slightly chewy kernel with a mild savory flavor likened to grits or tortillas. It does not taste like fresh corn.

Although hominy is a low-fat food it is not low carb. A one-cup serving has about 119 calories and about 24 grams of carbs. While there is quite a bit of fiber in hominy that can offset the carbs, it is low in protein (2.4 grams per cup).

Slow carb diets stress getting an abundance of protein to be successful. Substituting garbanzo beans for hominy in posole will not make it a low carb dish but it will increase the amount of protein from 2.4 grams per cup to 15 grams per cup.

That is a significant increase in protein if you are making a vegetarian posole on a slow carb diet. If you are using pork or chicken either hominy or garbanzo beans would work well. 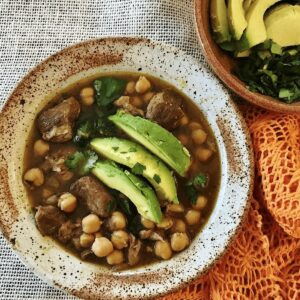 Calories: 203kcalCarbohydrates: 24.1gProtein: 30.7gFat: 8.3g
Did you make this recipe?If you tried this recipe, please give it a 5-star rating! To do this, just click on the stars above. And don’t forget to tag me at @dorothy_stainbrook_heathglen, if you share a picture on Instagram! You can also tag me at #heathglen!

Sounds delicious, I love garbanzos, and plan to make this. Question -- is that 2 cups dry or 2 cups soaked garbanzos? If the latter, I'm assuming about 2/3 - 1 c dried to come up with 2 cups soaked? Thanks!

Well Elizabeth I just dumped a small bag of dried in a bowl of water in the morning and let them soak most of the day. Then I measured them to around 2 cups, but it was after they were soaked. It actually ended up being a little more than 2 cups. If you used canned beans I would use both 14 oz cans. It really doesn’t effect the taste of the pozole, it’s just how many beans you want in your stew. I would probably use less next time as it was too filling for me.