Calabaza en Tacha (aka candied pumpkin) is one of the traditional treats served on the Day of the Dead Celebration, “Dia de Muertos”, but it is also a great dish for any Winter holiday table.

Jump to: Recipe | What is Calabaza? | Best Pumpkins to Use | Tips for Flavor | Substitutions | How to Serve

What is Calabaza en Tacha?

Calabaza en Tacha, or candied pumpkin, is a traditional Mexican celebration recipe It is a recipe that simmers sliced Winter squash in a syrup of piloncillo (or brown sugar) and aromatic spices. This is an easy holiday recipe for a delicious side dish or even dessert!

It is one of those traditional treats prepared especially for Día De Los Muertos, a celebration on November 1st and 2nd that honors and celebrates the life of those who have died.

The flavors in this dish are similar to those in candied yams, a dish often served as a side dish on an American Thanksgiving table. If you prefer a similar dish using sweet potatoes rather than squash, this sweet potato casserole is really popular on the American holiday table.

Unlike the Thanksgiving side dish however, Calabaza en Tacha is usually enjoyed in Mexico as a dessert, snack, or even as breakfast.

It is also one of the most common foods placed on family altars for the Dia de Muertos (Day of the Dead) holiday. A lot of Mexican food and drink is served at various Mexican celebrations beyond Day of the Dead, including these ten popular Mexican dishes.

Best Pumpkins to Use for Candied Pumpkin

In Mexico, candied pumpkin is usually made with calabaza de Castilla, a light-colored Winter squash with a tough rind. Cooks used to drill holes in the tough rind to allow the sugar syrup to penetrate. You can use any type of Winter squash to make this dish, but if the rind is tough poke it a few times with a knife (no drill required).

The Calabaza is a West Indian type of winter squash, with a sweet flavor and very firm texture. It looks similar to an American pumpkin, but the flavor more closely resembles butternut or acorn squash. They are very popular in the Caribbean and Central and South America.

I used a variety of Winter squash called Long Island Cheese, as it has bright orange flesh and a smooth, dense texture. Most Winter squash will work for this recipe. I would just avoid the kind of pumpkins sold for carving jack o’ lanterns. They are not the best in flavor.

I grow heirloom Winter squash and have provided a summary of flavor and texture of my favorite heirloom squash if you want more information.

Pro Tips for the Best Flavor

While this is a fairly simple recipe, there are a few things you can do to eke out the best flavor possible:

There are very few ingredients in this candied pumpkin recipe: the squash, the sugar and the spices. Here are the typical substitutions:

Piloncillo is sometimes referred to as Mexican brown sugar. Although similar to American brown sugar, it is less processed. It is not as swee as granulated white sugar and when reduced it turns into a syrup with notes of smoke, caramel and rum. Mmmm.

Orange and cinnamon an a bit of salt are the key flavors added to the syrup. Different cooks will also add cloves, star anise and/or allspice.

The oranges can be zested ahead of time or just sliced and added to the simmering syrup. Some cooks will add their favorite spices (mine is cardamom), but it is not necessarily traditional.

An added benefit to the flavor here is the sweet and spicy aroma that fills the house while it is simmering!

I’ve seen many different ways that people enjoy this dish. A classic way is to have it with Mexican crema, either drizzled over the top or used as a bed in a bowl with the pumpkin sitting on top.

Sometimes the candied pumpkin is served without crema in a bowl of syrup with more syrup drizzled on top.

Homemade candied pumpkin can be stored in an airtight container in the fridge for up to 10 days thanks to the sugar that acts as a preservative.

Is it a dessert or a side dish?

The traditional ways to enjoy candied calabaza in Mexico is at breakfast with a glass of cold milk, as a late-afternoon snack, or as a dessert with crema drizzled over. 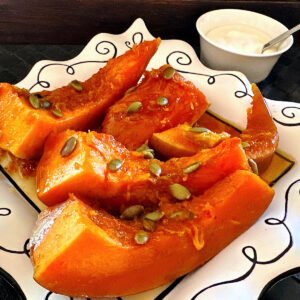 Calories: 186kcalCarbohydrates: 46gProtein: 2gFat: 1gSaturated Fat: 0.2gPolyunsaturated Fat: 0.5gMonounsaturated Fat: 0.3gTrans Fat: 0.001gSodium: 149mgPotassium: 632mgFiber: 4gSugar: 30gVitamin A: 16106IUVitamin C: 40mgCalcium: 110mgIron: 2mg
Did you make this recipe?If you tried this recipe, please give it a 5-star rating! To do this, just click on the stars above. And don’t forget to tag me at @dorothy_stainbrook_heathglen, if you share a picture on Instagram! You can also tag me at #heathglen!
Click here to cancel reply.

How long are you able to store it?

Well, it will keep in the fridge for quite a while, due to the sugar being a preservative (at least a week). I have to say howver, that the texture was much better when served the same day. It got a little sticky after storing a week. You could probably add some water to it before reheatin.

This one looks delicious!

It truly is. It’s a great dish to make for Winter holiday eating.