Although Mexican dinners are relatively easy to modify to be compliant with a low carb diet, Mexican desserts can pose more difficulties. This Low Carb Mexican Flan (Orange Flan De Queso) is a dessert that works well with low carb diets. It is creamy and scrumptious, with the only sugar coming from the fructose in a small amount of fresh orange.

Jump to: Recipe | What is a flan? | Do Flans Need Waterbaths? | How to Modify to Low Carb

What is a Mexican Flan?

Flan is a popular dessert in Spain and Latin America, and it most often refers to a custard made with eggs, sweetened condensed milk, cream or whole milk, plus flavorings such as vanilla, orange, coconut or coffee.

Because this type of egg-based custard is delicate, flan is baked in a water bath in the oven.

Another name for a Mexican flan is flan napolitano, which has a caramel layer on the bottom that is then inverted onto a serving plate so the caramel is on top.

A Mexican type of flan is similar to a French crème brulee, except that in the Latin American flan, the caramel top is more like a thin sauce with a less sweet flavor. In the French crème brulee the top is a layer of hardened caramelized sugar which often requires a torch to make.

While there are also savory flans made with eggs and often cheese (like the Italian sformato), Mexican flans are usually sweet and served for dessert.

The recipe below is actually a Flan De Queso, which uses cream cheese as an ingredient. This is not an uncommon ingredient to add and it makes for an even creamier flan!

Are Flans Made with a Water Bath?

Latin American egg-based flans are known for the smooth and creamy consistency of a custard and that is achieved by cooking the flan in a water bath. This creates steam within the oven which cooks the flan evenly and ensures that the eggs do not curdle or get scrambled.

The caramel is cooked on the bottom of the pan and the custard mixture on top. After it’s cooked (and cooled), the flan is then inverted onto a plate. The result is visually stunning, even though a flan is relatively easy to make.

Are all Flans Low Carb?

The trick to making flan low carb friendly is swapping out the sugar for a low carb sweetener and using heavy cream instead of condensed or evaporated milk.

The recipe below adds some orange zest and a tiny bit of orange juice. Be aware that If you add fruit to your flan the fruit may add carbs and sugar.

Most custard ingredients are low carb with the exception of some sweetener. I have opted for a sugar substitute for the sweetener since we are not using sweetened condensed milk. Feel free to use regular sugar if you are not concerned with the carb count.

If you steer clear of the Mexican desserts that use sweetened condensed milk and the higher sugar fruits, there are actually quite a few desserts that can be modified to low carb without a loss of flavor and texture (low carb Mexican flan being one of them)

I’ve recently been trying out desserts that highlight cheese, dark chocolate or berries and then using sugar substitutes to add the sweetness.  Over the next month I hope to work in paletas (fruit popsicles) and some inspired gelatins (how do strawberry margarita jelly shots sound?).

While I recommend avoiding the artificial sugar substitutes, there are some natural substitutes that don’t contain chemicals and are not likely to cause blood sugar spikes.  This would include xylitol, erythritol, stevia, and monk fruit extract.  Truvia, Swerve and a few other brands are blends of these substitutes.

Working with natural sugar substitutes can still be a bit tricky however.  A couple of things to watch for are:

My favorite sugar substitute as far as taste goes is Truvia (a mix of erythritol and stevia), but I think I might try liquid Stevia alone next time I make this Low Carb Mexican Flan.

While it tasted wonderful (really quite awesome to tell the truth), the Truvia did result in a “crunchy” caramel on the outside rather than a more flowing caramel you would get with regular pure cane sugar.  This is because it crystalized a bit.  I didn’t mind the crunch at all and it was a rather nice contrast to the creaminess of the flan, but it isn’t what you would expect when you think of an authentic Flan De Queso.

One way to prevent crystallization is to use less Truvia.  You would lose some of the sweetness that way but that may be preferable to you.

At any rate, this recipe for Low Carb Mexican Flan held up in flavor to a recent tasting of Mexican flans in some of the better restaurants over a recent vacation to Santa Fe, New Mexico so I am posting it for your pleasure.

There is quite a bit of confusion over some of the qualities of sugar substitutes.  Erythritol is currently one of the more popular sugar substitutes due to taste and it is important to note that even though the name sounds like a chemical it is a “sugar alcohol” which is different from an artificial sugar substitute.

While sugar alcohols do contain fewer calories than sugar, they occur naturally in plants, like fruits and vegetables. Erythritol and Stevia is the blend in Truvia, which is what I used for the Low Carb Mexican Flan.

If you want a little more in-depth information on sugar and some alternatives click here. 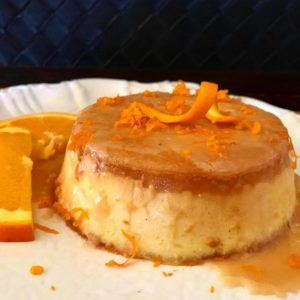 **Note: The trick to making flan low carb friendly is swapping out the sugar for a low carb sweetener and using heavy cream instead of condensed or evaporated milk. The recipe below adds some orange zest and a tiny bit of orange juice. Be aware that If you add fruit to your flan the fruit may add carbs and sugar.

Calories: 723kcalCarbohydrates: 4.5gProtein: 12gFat: 66.8gSugar: 3.9g
Did you make this recipe?If you tried this recipe, please give it a 5-star rating! To do this, just click on the stars above. And don’t forget to tag me at @dorothy_stainbrook_heathglen, if you share a picture on Instagram! You can also tag me at #heathglen!