Silky and sweet, bannana pudding layered with vanilla wafers and sliced bananas is quintessential Southern comfort food. My Louisiana mom’s version of this classic dish added layers of whipped cream instead of the meringue topping and used evaporated milk instead of sweetened condensed milk. It is a little less sweet than many versions, but is creamy rich and a treat for both young and old.

Banana pudding has a strong Southern identity that goes back more than half a century. A detailed history of banana pudding can be found at Serious Eats, where it is tied to bananas being imported to New Orleans, Nabisco’s marketing of Nilla Wafers, and the writings of food journalists.

The Serious Eats author of this comprehensive history states:

After World War II, banana pudding’s Southern identity really took hold, and by the 1950s, newspaper writers were routinely associating the dessert with the South. In 1956, for instance, a New York Age headline declared, “Deep South’s Banana Pudding Tasty Treat.” In 1959, the Oregon Statesman noted that banana pudding “has a touch of the South.”

As with any recipe that has a history, there is plenty of debate on authenticity. Some of the more common debate topics noted by the Serious Eats author includes:

Homemade pudding, vanilla or chocolate, is really underrated. The flavor is so much richer and so much more complex. The texture is thick (and slightly lumpy) rather than thin and watery like a powdered mix can be.

The instant pudding mix can look smooth and velvety but that texture doesn’t make up for the taste, especially in a banana pudding where a few delicious lumps just adds to the overall taste of the dish.

And truth be told, homemade pudding is actually quite simple to make.

Most of the classic banana pudding recipes, including the recipe on the Nilla wafer box, top the pudding-wafer-sliced banana layers with a egg white meringue that is baked. I have opted for a whipped cream topping for 4 reasons: 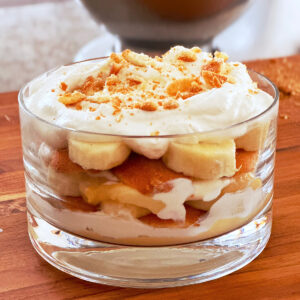 This is a Southern recipe for banana that uses evaporated milk rather than sweetened condensed and whipped cream rather than meringue. It is creamy, sweet and very easy.
No ratings yet
Print Recipe Pin Recipe
Prep Time 30 mins
Cook Time 5 mins
Servings 8
Calories 625
Author Dorothy Stainbrook

**NOTE:   Whipped cream doesn’t require any baking like a meringue does. They both need to be whipped into soft peaks, but the whipped cream is then used right away without baking. Note this example of what soft peaks with whipped cream looks like.

Calories: 625kcalCarbohydrates: 73gProtein: 8gFat: 36gSaturated Fat: 21gPolyunsaturated Fat: 3gMonounsaturated Fat: 9gTrans Fat: 0.3gCholesterol: 139mgSodium: 285mgPotassium: 439mgFiber: 2gSugar: 52gVitamin A: 1234IUVitamin C: 6mgCalcium: 142mgIron: 2mg
Did you make this recipe?If you tried this recipe, please give it a 5-star rating! To do this, just click on the stars above. And don’t forget to tag me at @dorothy_stainbrook_heathglen, if you share a picture on Instagram! You can also tag me at #heathglen!
Click here to cancel reply.