Thanksgiving feasts often end up with leftover turkey that can be very dry the next day. A quick way to repurpose that turkey into a hearty breakfast or lunch for the day after Thanksgiving is to make a simple open faced turkey sandwich, but dress it up with a Southern red-eye gravy. Not only is it delicious, but it keep you awake for the rest of the festivities!

Jump to: RECIPE | What is Red Eye Gravy? | What Does it Taste Like? | Ingredients & Substitutions | Red Eye vs Country Gravy | How to Serve it | Common Questions

What is Red Eye Gravy?

Red-eye gravy hails from the Southern US and it is usually associated with the grease that comes from country ham. Basically it is a thin sauce made from the drippings of pork (sometimes bacon), and it is always combined with coffee (usually strong black coffee).

My husband is a lover of this gravy and frequently tries out different versions for breafast. Until I did a bit of research, I assumed it was called red-eye gravy because it had coffee in it and was there forward helpful in easing a hangover. Well, that may be partially right, but of course there is a debate.

One side of the debate believes that red-eye gravy’s name comes from its visual resemblance to a red human eye, owing to the red pepper and the eye-shaped layer of grease that forms on the surface of the gravy when the coffee and chicken broth are added to the ham drippings. Hmm, I sure didn’t notice that.

Another version of its naming history was that President Andrew Jackson asked for ham with a topping of gravy as red as his cook’s bloodshot eyes (from drinking the night before). I’ll go with this version.

Unlike the traditional gravy you may have had with your turkey dinner, red-eye gravy is more of a thin sauce. It has a slightly bitter background from the coffee, which many find to be a pleasant, if somewhat unique, taste.

It is common to add some spicy peppers to the sauce, and the cook’s preference on the level of heat from the peppers may range from mild to very spicy. My recipe below also adds a touch of bourbon which adds warmth to the slightly bitter coffee.

What Kind of Fat is Best?

Because it originated in the South, the country ham is usually associated with red-eye gravy. Since I wanted to use the gravy with turkey, I used a little bacon grease mixed with some chicken broth. The fat from the grease is really a necessity for this kind of ”gravy”.

Although it is meant to be a thin sauce, many cooks will thicken it up slightly by adding a bit of flour to the grease (a roux).

Just remember it is not the flour-thickened gravy typically served at Thanksgiving with the turkey. It can be a relief however, to be spared some of the richness the day after the Thanksgiving feast.

What Goes with Red Eye Gravy?

Southern cooks often serve this gravy with either biscuits or ham (or both). Other popular ways to serve it include:

And of course, don’t forget the classic old fashioned banana pudding with Nilla wafers for dessert!

If you find the gravy a bit too bitter from the coffee, add about one tablespoon of chicken broth and then a pinch of sugar to mellow out the flavors. Because the recipe below is serving the gravy with turkey, I added a little more chicken broth.

Although the traditional version does not include a roux, some cooks will thicken it slightly with pinches of flour or cornmeal.

Other common additions include pinches of sugar, a little hot pepper spice or a touch of bourbon.

While redeye gravy is more of a thin sauce made with pork drippings and strong coffee, country gravy is a thicker, gravy made by adding milk and a flour roux to the pork drippings.

Country gravy also goes by the common names of Sawmill gravy or Sausage gravy. It is typically made with dripping from pork sausage rather than bacon or country ham drippings.

There is no coffee included in the country gravy and it is therefore a lighter color. While redeye gravy is used is used to top off many different dishes or proteins, country gravy is primarily seen as a ”biscuits and gravy” dish. Country gravy is sometimes referred to as biscuit’s soulmate.

More Recipes that Use Leftover Turkey:

If you find the gravy a bit too bitter or sour (from the coffee), add about one tablespoon of chicken broth and then a pinch of sugar to mellow out the flavors.

Cajun-style redeye gravy gets its kick from coffee as well (possibly chicory), but the meat drippings come from roast beef rather than ham. The spice background might also vary according to the cook. 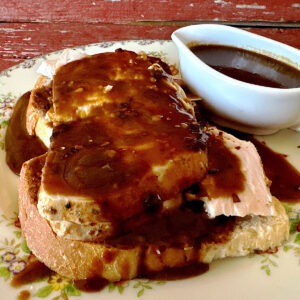 Red eye gravy is made with bacon grease and strong black coffee and is a perfect foil for leftover Thanksgiving turkey that might be on the dry side. Try it as an open-face sandwich for breakfast or lunch in the days following the holiday feast.
5 from 2 votes
Print Recipe Pin Recipe
Prep Time 10 mins
Cook Time 10 mins
Servings 2
Calories 331
Author Dorothy Stainbrook

**NOTES: If you find the gravy a bit too bitter from the coffee, add a couple of tablespoons chicken broth and then a pinch of sugar to mellow out the flavors. Because this recipe is serving the gravy with turkey, I added a little more chicken broth, but no sugar. Also the traditional version of redeye gravy does not include a roux. I have added a little flour as a roux to get it a little thicker, but it is not necessary if you want a thin redeye sauce.

Calories: 331kcalCarbohydrates: 38gProtein: 9gFat: 16gSaturated Fat: 6gPolyunsaturated Fat: 2gMonounsaturated Fat: 7gCholesterol: 15mgSodium: 593mgPotassium: 228mgFiber: 3gSugar: 3gVitamin A: 1187IUVitamin C: 0.03mgCalcium: 51mgIron: 3mg
Did you make this recipe?If you tried this recipe, please give it a 5-star rating! To do this, just click on the stars above. And don’t forget to tag me at @dorothy_stainbrook_heathglen, if you share a picture on Instagram! You can also tag me at #heathglen!
Click here to cancel reply.