Recipes that include whipped cream or beaten egg whites often tell you to beat to “soft peaks” or to “stiff peaks”. What exactly does that look like and how long does it take before you see soft peaks? This is where a picture (or video) is worth a thousand words. Watch the short video below before starting your recipe. It will quickly help you know how to distinguish soft peaks vs stiff peaks.

Soft peaks barely hold their shape. The peaks flop over immediately when the beaters are lifted.

Stiff or firm peaks stand straight up when the beaters are lifted. (Medium-stiff peaks are just stiff enough to stand up firmly but with a slight curl at the tip.)

What Type of Recipes Need Soft vs Stiff Peaks?

Some of the more common recipes that call for some level of peaks include:

How Long for Soft or Stiff Peaks in Cream?

In the video I timed how long it took to get to soft peaks and stiff peaks when using whipped cream. The timing experiment had three important variables:

With these variables in mind…

Just know to watch very carefully. Once the cream gets to soft peaks, it will turn to stiff peaks very quickly. And, of course, beating the cream for too long will turn it to butter!!

When cream or eggs are whipped, air gets trapped inside and causes the ingredient to foam, grow in volume, and become stiff.

Sometimes whipped egg whites can be unstable and difficult to work with, so a stabilizer such as sugar or an acid (like vinegar or cream of tartar) is often added to the whites.

Sugar also increases the coagulation temperature of the egg protein, allowing cakes or soufflés to rise more before they set.

I often add a tablespoon of bourbon or brandy to the whipped cream just to enhance the flavor a bit. This enhancement is wonderful on pie, and takes an Irish coffee to a new level!

If your whipped egg whites become curdled and dry, they have gone too far (i.e., been whipped too long or too vigorously).

For stable egg whites that will never get out of hand, just add a little acid. A popular acidic ingredient for this is cream of tartar. Use 1/8 teaspoon of tartar per egg, and add it at the very start.

Lemon juice or vinegar might work, but it’s less consistent in acidity than cream of tartar so not as reliable.

Although popular advice is to have egg whites at room temperature before whipping, this is not necessary. Straight from the refrigerator is just fine.

Cold eggs are firmer inside the shell, which means it will be easier to separate the yolks from the whites without the yolk breaking and mixing with the whites. When too much of the yolk mixes with the whites they will be harder to beat into peaks.

What to do with the leftover yolks?

Egg yolks will keep in an airtight container in the fridge for up to three days. My favorite use is to add them to scramble eggs to beef up the protein and the egg taste. If you make your own mayonnaise, that is a good use also.

And finally, two desserts that are great for Valentines’ Day: a Raspberry Chambord trifle and some low sugar/low carb chocolate pots

How to Recipe and Video: 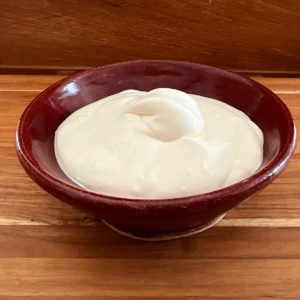 Calories: 82kcalCarbohydrates: 1gProtein: 1gFat: 9gSaturated Fat: 5gPolyunsaturated Fat: 1gMonounsaturated Fat: 3gCholesterol: 33mgSodium: 9mgPotassium: 18mgSugar: 1gVitamin A: 350IUVitamin C: 1mgCalcium: 16mgIron: 1mg
Did you make this recipe?If you tried this recipe, please give it a 5-star rating! To do this, just click on the stars above. And don’t forget to tag me at @dorothy_stainbrook_heathglen, if you share a picture on Instagram! You can also tag me at #heathglen!
Click here to cancel reply.