Some “trifles” can be a bit on the fussy side. This easy raspberry trifle can be made in 10 minutes and is extremely tasty. It’s a perfect dessert for celebrations or Summer porch afternoons! Easy, elegant, and delicious.

Whether or not you subscribe to the legend of Marie-Antoinette inciting riots contributing to the French Revolution by pompously declaring “Let them eat cake” when told the French citizens were starving, it is certainly a memorable quote that has resonated with much of the world at some time or another.

That infamous statement is reported to have contributed to her beheading by guillotine, for reasons of Treason, at the Bastille in 1793. Always interested in the food and drink surrounding celebrations, I put together a simple recipe for Bastille Day, which I’m sure both Marie-Antoinette and the peasants would find delicious.  It’s a very easy but tasteful Raspberry Trifle using the French liqueur called Chambord. It also brings in a little Italian influence with a touch of Limoncello.

It also works wonderfully for Valentines Day. Scarlet red raspberries, rich fluffy whipped cream with a touch of alcohol, and a sweet crunchy ladyfinger as a spoon. An impressive Valentines dessert that is deceptively easy to make.

When Parisian revolutionaries and rebellious troops stormed the royal fortress of Bastille it signaled the beginning of the French Revolution, a decade of political turmoil and terror in which King Louis XVI was overthrown and tens of thousands of people, including the king and his wife Marie Antoinette, were executed.

In 1789, there were severe food shortages in France, and popular resentment against the rule of King Louis XVI was turning to fury as the citizens were starving while the monarchy luxuriated in comfort and excess.  The capture of the Bastille on July 14th symbolized the end of the ancien regime and provided the French revolutionary cause with an irresistible momentum.

Joined by four-fifths of the French army, the revolutionaries seized control of Paris and then the French countryside, forcing King Louis XVI to accept a constitutional government. In 1792, the monarchy was abolished and Louis and his wife, Marie-Antoinette, were sent to the guillotine for treason in 1793.

For the peasant class, the Bastille stood as a symbol of the hypocrisy and corruption of the aristocratic government – controlled mostly by nobility and clergy. The French recognize Bastille Day as the end of the monarchy and beginning of the modern republic.

Today, Parisians celebrate this national holiday with a grand military parade up the Champs Elysées, colorful arts festivals, and raucous parties marking the holiday. Here on the farm we intend to uncork a bottle of sparkling wine, serve up some Raspberry Chambord Trifles, and celebrate. Vive la France!

If you can handle a bit of corniness, check out this video where I show you “quickly” how to make the trifle. Just know that I start and end the video with a re-enactment of Bastille Day with me as Marie Antoinette and my husband and daughter as the peasants. Caveat: it is corny. Watch the last out-take for a behind the scene of our family. 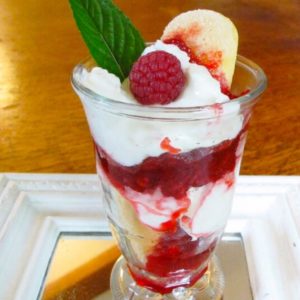 Calories: 571kcalCarbohydrates: 56gProtein: 6gFat: 38gSaturated Fat: 22gPolyunsaturated Fat: 2gMonounsaturated Fat: 11gCholesterol: 165mgSodium: 184mgPotassium: 142mgFiber: 1gSugar: 40gVitamin A: 1537IUVitamin C: 1mgCalcium: 91mgIron: 1mg
Did you make this recipe?If you tried this recipe, please give it a 5-star rating! To do this, just click on the stars above. And don’t forget to tag me at @dorothy_stainbrook_heathglen, if you share a picture on Instagram! You can also tag me at #heathglen!
Click here to cancel reply.