Beef birria stew (Birria de Res Con Consomé) is a rich stew that is traditionally made with either goat or lamb, but beef is the preferred meat in the U.S. The meat is always slow cooked in a richly-flavored broth until it is melt-in-your-mouth tender. When served as a stew it is simply ladled into bowls with its broth (the consomé) and served with a range of toppings and corn tortillas. This Mexican stew is also used to make the popular birriatacos, but you need to make the birria stew before you can get to the tacos!

The original birria is said to have originated in Jalisco, Mexico, where it is traditionally served as a stew for holidays and special occasions and typically made with either goat or lamb.

There are, of course, many variations in the different regions of Mexico and elsewhere. The meat is often marinated in a rich adobe sauce and then slow cooked until it is melt-in-your-mouth tender.

To serve, the meat is ladled up into bowls along with plenty of its broth, garnished with onions and cilantro, and then served with a side of warm corn tortillas and sliced lime wedges.

The broth, or consommé is rich with flavor and the fresh acidity of the onions and limes complement the flavoring perfectly.

What is the Best Meat to Use for Birria?

My preferred meat for this dish is a combination of beef chuck roast and 3-4 short ribs. The short ribs offers the benefit of adding collagen to the consommé making a deliciously rich and robust broth. The chuck roast is the meat that is consumed as the stew meat (or shredded later for birria tacos)

The classic meat used for birria in the regional areas around Mexico is either goat or lamb (or mutton). As birria has become popular in the U.S., beef is often preferred, from both a flavor perspective as well as expense.

I have also used country style ribs (which are pork) with the chuck roast and it was excellent. They probably don’t have as much collagen as the short ribs, but they offer more stew meat that is easily shredded for tacos.

Oxtails are also a great substitute for short ribs if you have them readily available, although they have recently become quite expensive.

There are a few ingredients that are key to birria and some that are preferences or variations. Here are some substitutions for you to modify to your own preferences:

Can Beef Birria be Made in an Instant Pot or Slow Cooker?

You can make the stew any way you like, but I prefer it slow cooked in a dutch oven. The key is to get the meat fork tender and to have all of the spices and ingredients completely infused into the consommé.

In the dutch oven on the stove top I can periodically check it for tenderness and taste it to see if I need to add more spices, salt or vinegar. This can be done with a slow cooker also, but I save crockpot cooking for those times when I won’t be around to periodically lift the lid and taste test.

The instant pot definitely takes less time, but the dutch oven is not hands-on time. Just choose a slow Sunday and cook it nice and slow, savoring the smells that permeate the house.

It will be delicious in all three ways so it’s really a preference type of thing.

Slow Cooker – you would make the sauce as stated in the recipe. Sear the meat (if your slow cooker has this option – most do). And then pour in the sauce and broth. Set it to “high” and cook for 6 to 7 hours.

After making this stew with the rich broth, you can shred the meat and use in these Quesatacos.

There are several Mexican dishes that have a similar flavor profile to birria. Here are a few:

Why is my beef birria greasy

There is a lot of fat in the cuts of meat used for birria so that may give it the texture that some people think of as greasy. If you want less fat, you could make it ahead, remove (or shred) the meat and store the sauce in the fridge. The fat will solidify on the top, which you can easily skim off. The broth may not be quite as rich this way if you are planning on using it to fry the tortillas in.

The heat profile is dependent on which chile peppers you choose. Most of the chile peppers recommended for birria will give you a medium heat profile. It is more about the complexity of the mix of peppers and spices than it is about heat.

Can I make this in a slow cooker or instant pot?

This can be done in a large slow cooker. The meat will need to cook on LOW for 6-8 minutes hours until it easily shreds.
For the instant pot you would use the “stew” setting or a high pressure setting for 45-50 minutes and a natural release. See above for more details. 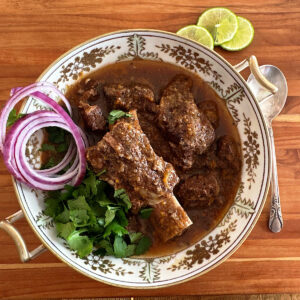 A rich and popular stew from Mexico where the meat is slow cooked until fall apart tender made in a robust flavorful broth. The leftover meat and broth can be made into quesa birria tacos!
5 from 1 vote
Print Recipe Pin Recipe
Prep Time 30 mins
Cook Time 3 hrs 30 mins
Servings 8
Calories 274
Author Dorothy Stainbrook

**NOTE: If you would rather turn this stew into birria tacos which is very popular right now, save out the broth as a consumme, shred the beef and put it together as directed in this birria taco recipe

Calories: 274kcalCarbohydrates: 3gProtein: 28gFat: 17gSaturated Fat: 7gPolyunsaturated Fat: 1gMonounsaturated Fat: 8gTrans Fat: 1gCholesterol: 98mgSodium: 1131mgPotassium: 604mgFiber: 1gSugar: 1gVitamin A: 27IUVitamin C: 10mgCalcium: 45mgIron: 3mg
Did you make this recipe?If you tried this recipe, please give it a 5-star rating! To do this, just click on the stars above. And don’t forget to tag me at @dorothy_stainbrook_heathglen, if you share a picture on Instagram! You can also tag me at #heathglen!
Click here to cancel reply.

I wish someone would come and cook this for me. I'm hungry and it sounds devine. Maybe I'll hit Costco tomorrow and get a chuck roast. They have really nice ones most of the time. Thanks for the recipe!

@dorothy stainbrook, thank you. My mind was in a fig when I was initially reading the recipe.

Whoa! That would be a lot of tomatoes! No, it says 14-16 ounces of canned tomatoes. Some of the Rotel cans are 14 ounces, whereas the other brands of canned tomatoes are 16 ounces. Just one can tomatoes (either 14 or 16 ounces). I’ll try and make that clearer. Thanks for the comment.