Skip to Content
Home » Recipes by Ingredients » Pork » How to Make Tamales: Step-by-step Tutorial for Beginners

Tamales are special. While not the easiest thing to make, the recipe below offers a few methods to make it easier by revising the step where you rehydrate, deseed and roast the dried peppers. These tamales have excellent flavor and texture and can be made even easier if you enlist family or friends in the assembly!

Jump to: Recipe | 5 Secrets to Great Tamales | Tradition | Fillings | What to Serve with | Assembly Steps

The 5 Secrets to Great Tamales:

When are Tamales Traditionally Served?

In Mexico, tamales are traditionally served at holidays, particularly the Winter holidays.  Tamales are often served on Dia de Los Muertos (Day of the Dead) and the days around Christmas.

On January 6th (Dia de los Reyes- Kings’ Day), many Mexican families serve a cake with a figurine of the baby Jesus baked into it.  Whoever finds the figurine in their slice of cake is in charge of making tamales for the Día de la Candelaria celebration on February 2nd.

One of the nicest things about making tamales is that they are so versatile.  If you don’t like pork, the recipe below would work with chicken as well.  Once you get the basic tamale assembly down, you can substitute the meat and sauce easily.  Here are some of my favorite filling options:

What to Serve as a Side?

My daughter lives in Colorado and always serves her tamales with a pork green chile sauce. Because she was sworn to secrecy before receiving that recipe, she will not share it with me (or you). However, here are a few other side dishes that pair wonderfully with tamales:

And…..don’t forget the cocktails! A margarita is classic, or try sipping this awesome tequila flight!

The process of wrapping and steaming the tamales was an effort of trial and error, with a little help from my husband. I’ve included some pictures below of the process that works for me, but it does take a little bit of practice to get it “perfect”. However, these tamales are so flavorful that even if it doesn’t turn out exactly how you want, you will still enjoy it! 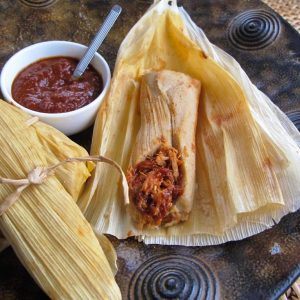 Ingredients for the shredded pork

Ingredients for the red chile sauce

Ingredients for the masa (dough)

Directions to make the shredded pork:

Directions for the red chile sauce

Directions to make the masa (dough)

Directions to assemble the tamales

**Red Chile sauce with dried peppers rather than the spice blend 6 dried ancho peppers 3-5 dried chipotle peppers Remove stem and seeds from chiles. Add all to a stock pot and cover with water. Bring to a boil and reduce heat to a simmer. Simmer for 15-20 minutes and drain off water. Add soaked/drained chiles to the onion mixture instead of the spice blend.

Calories: 228kcalCarbohydrates: 14gProtein: 15gFat: 13gSaturated Fat: 7gCholesterol: 63mgSodium: 536mgPotassium: 365mgFiber: 1gSugar: 1gVitamin A: 362IUVitamin C: 4mgCalcium: 54mgIron: 2mg
Did you make this recipe?If you tried this recipe, please give it a 5-star rating! To do this, just click on the stars above. And don’t forget to tag me at @dorothy_stainbrook_heathglen, if you share a picture on Instagram! You can also tag me at #heathglen!
Click here to cancel reply.

Mmm good tamales! I took a picture of these beautiful creations but not sure how to upload it here...

Thank you so much Stephanie...and Happy New Year to you also!