Traditional birria tacos (tacos de birria) are made with braised goat or lamb meat, but it can also be made with beef. The meat is slow cooked in a richly seasoned broth until it is fall apart tender. At this point the birria can be enjoyed either as a stew or the meat can be removed and shredded for quesa tacos. For the tacos, the fork-tender stew meat is shredded and the leftover birria consommé is used as a dipping sauce.

Table of Contents: Birria Tacos Recipe | What is Birria? | Ingredients | Using a Comal | What to Serve with | Birria Stew Recipe

The original birria is said to have originated in Jalisco, Mexico, where it is traditionally served as a stew for holidays and special occasions and typically made with either goat or lamb. There are, of course, many variations in the different regions of Mexico and elsewhere.

The meat is always slow cooked in a richly-flavored broth until it is melt-in-your-mouth tender. When served as a stew (the original dish), the meat is ladled up into bowls along with plenty of its broth, garnished with fresh toppings, and finally served with a side of warm corn tortillas.

Shredding the birria meat and using some of the birria broth to make quesa tacos is however an increasingly popular way to enjoy birria. The meat is shredded, the corn tortillas are dipped in the birria broth (referred to as consommé) and fried on a comal or hot skillet.

From there, a melting cheese is added to the tortilla along with the shredded meat and different filling preferences. I add pickled onions and cilantro to add acidity and bite to the rich meat and consomme. The resulting taco is then served with a small bowl of birria broth as a dipping sauce.

What makes Birria Tacos different from other tacos?

There are three things make these tacos really stand out among all the great tacos:

The main ingredients for the tacos are birria consomme, shredded meat from the birria stew, corn tortillas, and cheese. From there you can add any number of your favorite taco fillings. My favorite additions are pickled onions and cilantro. Here are a few other additions and substitutions:

In the video you will see that I used a comal to fry the tacos. A comal is basically a round, flat, cast iron griddle. A cast iron skillet is also usually round but it has sides to give it some depth. And a griddle is often long and rectangular.

The one shown above fits over two of our gas burners, but you can get a stand-alone griddle if you don’t have a stove that fits the griddle

The benefit of cast iron over other types of frying pans is that cast iron retains the heat once heated up. This makes it easier to fry more than one or two tacos because the skillet will remain hot.

Some of the pros and cons of each include:

Whether comal, skillet or griddle, just aim for cast iron so that you can retain the heat while making a batch of tacos. These birria tacos are so incredible that you will definitely want to make enough to feed a crowd (even if that crowd is only 2-3 people)!

What to Serve with Tacos de Birria

These birria tacos are good enough to eat dozens on their own. If you wanted to add a side however, you could serve them with homemade tortilla chips or Mexican rice.

I typically serve tacos with fresh lime wedges, a bottle of hot sauce for those who want more heat, a side of pickled onions, and a side of chopped cilantro. That typically covers the bases.

There are several Mexican dishes that have a similar flavor profile to birria. Here are a few: 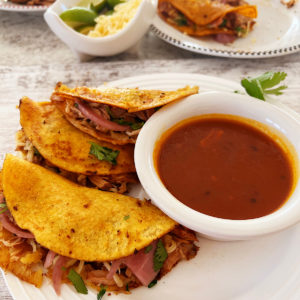 These popular tacos are made with a shredded meat that has been cooked ahead in Mexican spices and a rich broth. The meat is shredded and the corn tortillas are fried after dipping them in the birria consomme. Cheese and your favorite toppings complete the tacos.
No ratings yet
Print Recipe Pin Recipe
Prep Time 15 mins
Cook Time 15 mins
Servings 8
Calories 287
Author Dorothy Stainbrook

**NOTE:  For popular substitutions go to the Table of Contents at the top of the post or scroll down to the dark salmon colored heading called “Ingredients and Substitutions”

Calories: 287kcalCarbohydrates: 12gProtein: 21gFat: 18gSaturated Fat: 9gPolyunsaturated Fat: 1gMonounsaturated Fat: 6gTrans Fat: 1gCholesterol: 77mgSodium: 322mgPotassium: 263mgFiber: 2gSugar: 1gVitamin A: 377IUVitamin C: 1mgCalcium: 213mgIron: 2mg
Did you make this recipe?If you tried this recipe, please give it a 5-star rating! To do this, just click on the stars above. And don’t forget to tag me at @dorothy_stainbrook_heathglen, if you share a picture on Instagram! You can also tag me at #heathglen!
Click here to cancel reply.