Mexican sausage banderillas are essentially hot dogs wrapped and fried in a flour tortilla and usually served as a lunch food. Add a spicy Mexican pizza sauce (aka chimichurri for pizza) instead of ketchup or mustard and you have a much tastier dish that can be enjoyed as lunch or dinner. Both the banderillas and the spicy pizza sauce are simple to make and take less than 15 minutes.

In Spain the banderilla may refer to a type of tapas or appetizer secured on a toothpick. In Mexico sometimes the corn dog in street food would be called a banderilla, with the stick through the dog being the “banderilla” part.

The banderilla recipe in this post is a simple casual dish that you would find in the home kitchen rather than the corn dog type of street food.

It is essentially a Mexican tortilla roll up that is fried and served with a hot sauce.

Is the Chimichurri Pizza Sauce Spicy?

Yes, it is fiery hot! The chile peppers in Chimichurri pizza sauce are called Chile de Arbol peppers, which are small dried peppers that reach about 30,000 Scoville Heat Units. That’s about 6 times spicier than a jalapeno!

In addition to being hot however, Chile de Arbol peppers are also packed with flavor. They are quite popular in taquerias, where they are made into sauces drizzled over tacos and tostados.

Chimichurri pizza sauce has been compared to a spicy hot buffalo sauce typically used on wings. The chile de arbol peppers can be found in most large grocery stores. In Minnesota they are tucked away in the produce section. They are widely available at any Latin market.

The sauce was originally designed to be served with pizza, but it is excellent drizzled over many, many Mexican dishes. Here are a few of my favorites: 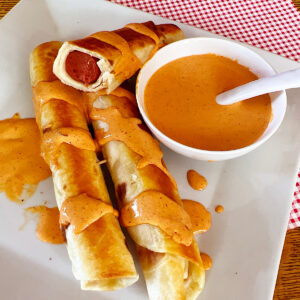 For the Pizza Sauce

Calories: 330kcalCarbohydrates: 26gProtein: 9gFat: 21gSaturated Fat: 5gPolyunsaturated Fat: 5gMonounsaturated Fat: 10gTrans Fat: 0.03gCholesterol: 28mgSodium: 596mgPotassium: 191mgFiber: 1gSugar: 4gVitamin A: 276IUVitamin C: 1mgCalcium: 113mgIron: 2mg
Did you make this recipe?If you tried this recipe, please give it a 5-star rating! To do this, just click on the stars above. And don’t forget to tag me at @dorothy_stainbrook_heathglen, if you share a picture on Instagram! You can also tag me at #heathglen!
Click here to cancel reply.