A low carb Ratatouille lends itself perfectly to low carb, slow carb or ketogenic lifestyles, and is a perfect dish for Summer.  I always avoided Ratatouille because it seemed like too much work, but once the vegetables are chopped, it’s simple! And it lends itself to roasting, sautéing, or cooking in the crockpot or slow cooker!

Ratatouille originated with French peasants in an attempt to use up their summer vegetable harvest. The vegetables were prepared in a “rough cut” method and served with inexpensive rice.

The French word “rata” means chunky stew, with the “toullier” meaning “to stir up”. Although sometimes viewed as a soup or stew, ratatouille today is often considered a side dish or a vegetarian meal.

The ingredients traditionally include end-of-summer vegetables like eggplant, tomatoes, and bell peppers. Other common vegetables in a ratatouille would be onions, garlic and zucchini.

Although most of the vegetables are roasted in the oven, the onions are best if caramelized on the stovetop along with the spices at the end of the process.

Sautéed ratatouille is basically a layering approach where you saute one veggie until done, add another layer of vegetable, and then keep adding layers until you have a wonderful, colorful, tasty mixture of late summer produce and herbs.

So, the difference is basically that the sautéed method brings out the flavor of each individual vegetable because of the slow layering approach, whereas the roasted version adds a sweeter richness to the vegetables and to the overall dish.

Fresh veggies from the farmers’ markets are best with ratatouille, but using whatever is available to you will still give you a delightful dish.

Can Ratatouille be made in a Slow Cooker?

Sprinkle with herbs and salt, drizzle olive oil over the top and cover and cook on low for 7 to 9 hours.

What to Serve with Ratatouille

Ratatouille can certainly be delightful on its own as a lunch or even a vegetarian dinner. Often however, it is considered a side dish to a protein, especially on a slow carb lifestyle where protein is important.

Here are a few pairing and serving suggestions, whether slow carb, vegetarian or just a food lover:

Tomatoes, eggplant and onions do have more carbs than greens like spinach or cruciferous vegetables like broccoli. The amount of carbs in these three vegetables (and fruit) would prevent the dish from being keto friendly.

Whether it could be considered low carb or slow carb would primarily depend on the rest of the meal and your carb count for the whole day.

It also depends on whether you are in a maintenance mode or if your goal is weight loss. I consider 50-100 grams of carbs per day in the range of low carb or slow carb for me personally.

I have been in maintenance mode for quite a few years however. Back when the goal was weight loss, I would have considered this dish to be too high in carbs. Either way, it’s definitely healthy and delicious!!

Other Versions: Ratatouille vs Tian vs Byaldi

Ratatouille has shed its peasant origins and is often served in upscale restaurants these days. Here are a few other versions of this ubiquitous dish:

Ratatouille: Ratatouille is considered a vegetable stew, or a baked vegetable casserole that originated in Nice in the Provence region of France. It typically features eggplant, sweet peppers, summer squash, garlic, onion, and tender green herbs, in a tomato-based sauce.

Vegetable Tian: While a tian includes the same type of ingredients as a ratatouille, it is a much more “upscale” presentation. In a tian, the vegetables are thinly sliced, alternated in rows then stacked upright rather than layered horizontally.

The bottom of the pan is typically covered with either a layer of cooked onions or tomato sauce then the whole dish is covered for the first half of the cooking time to trap in moisture. This recipe gives the details for the vegetable tian pictured above

There are countless variations of each of these dishes, but the one thing they share in common is that they are all delicious! 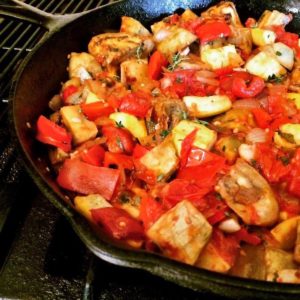 Slice and chop your favorite summer vegetables and then you have the option of a ratatouille with roasted or sauteed vegetables in the oven, on the stovetop or in a slow cooker. Each has its pros and cons
4.60 from 5 votes
Print Recipe Pin Recipe
Prep Time 30 mins
Cook Time 30 mins
Servings 4
Calories 374
Author dorothy stainbrook

Calories: 374kcalCarbohydrates: 29gProtein: 6gFat: 28gSaturated Fat: 4gSugar: 17g
Did you make this recipe?If you tried this recipe, please give it a 5-star rating! To do this, just click on the stars above. And don’t forget to tag me at @dorothy_stainbrook_heathglen, if you share a picture on Instagram! You can also tag me at #heathglen!