Rajas is a Spanish term which literally translates to “strips” or “slices”. But for lovers of Mexican cuisine, rajas con Queso usually refers to roasted poblano chile strips cooked with onions and cream (often sour cream) and white cheese (often jack or asadero cheese).  It can be served as tacos, quesadillas or simply in a bowl if you want a low carb dish.

Jump to: Recipe | How to Roast & Skin Peppers | Low Carb?

Rajas can make a wonderful side dish, a vegetarian main dish or a filling for some of the best tacos you’ve ever laid lip to.  And to top it all off, rajas are keto and low carb (without the tortillas of course)!

Speaking of low carb tortillas, I found a convenient one that is pretty good at Target.  It is called La Banderita Carb Counter wraps.  For a run-down on low carb tortillas (store bought and home made), click here.

Rajas depend primarily on poblano chiles, which have a rich distinctive flavor. On a scale of 1 to 10, these chiles are a considered around a 4 in terms of heat.  That can vary, of course, depending on where and how they are grown.

The heat of chile peppers increases when they are grown under stress (i.e., hot dry conditions), so the microclimate will determine the exact heat index.

In the grocery store, look for glossy, dark green Poblano peppers (they are often mis-labeled as Pasilla peppers).

How to Roast & Skin the Poblanos

Rajas Filling for Tacos or Quesadillas:

Rajas con queso (Pronounced ra-HAS con KAY-so) is often used to reference using rajas as a taco filling.  We had the rajas alone as a side dish one night and then added pulled pork and cotija cheese to a low carb tortilla.

Another classic Mexican dish using poblanos and cream is Rajas con Crema. This version adds corn and mushrooms and folds the rajas mixture into cheese quesadillas. 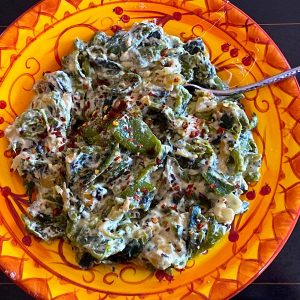 A classic Mexican dish made with Poblano peppers, onions and cream and cheese.  Rajas can be used as a side dish or as filling for tacos.
4.75 from 4 votes
Print Recipe Pin Recipe
Prep Time 30 mins
Cook Time 15 mins
Servings 6
Calories 101
Author Dorothy Stainbrook

Calories: 101kcalCarbohydrates: 3gProtein: 4gFat: 8gSaturated Fat: 5gPolyunsaturated Fat: 0.3gMonounsaturated Fat: 2gCholesterol: 24mgSodium: 479mgPotassium: 75mgFiber: 1gSugar: 2gVitamin A: 240IUVitamin C: 3mgCalcium: 137mgIron: 0.3mg
Did you make this recipe?If you tried this recipe, please give it a 5-star rating! To do this, just click on the stars above. And don’t forget to tag me at @dorothy_stainbrook_heathglen, if you share a picture on Instagram! You can also tag me at #heathglen!
Click here to cancel reply.