This creamy Mexican comfort food can be used in quesadillas or just eaten on it’s own. There are always nuanced versions of classic regional dishes, but the poblanos and crema are key ingredients in all versions. This recipe from the Bajío region of Mexico adds mushrooms, corn and some chicken bouillon and wraps it all in a cheese filled tortilla.

What is Rajas con Crema?

Rajas con Crema is a super simple, vegetarian Mexican dish made from strips of roasted poblano peppers combined with onions, cream, and melted cheese. The recipe below is a version from the Bajío region, which adds corn and mushrooms.

This is another similar version this rajas dish, called Rajas con Queso. It is a low carb version made by the “White Tia”

Are Poblanos in the Rajas Spicy?

Poblanos are the star of rajas con crema and they have their own distinctive chile pepper flavor, sometimes referred to as “earthy”. They are what I would consider “moderately” spicy, given a 4 on a heat scale from 1 to 10.

The heat varies with chile peppers, depending on where and how they are grown.  The heat of chile peppers increases when they are grown under stress (i.e., hot dry conditions), so the microclimate will determine the exact heat index.

In the grocery store, look for glossy, dark green Poblano peppers (they are often mis-labeled as Pasilla peppers).

**Tip: If you like your Mexican food spicier, add a few jalapeños to the skillet when cooking the rajas mixture

How to Serve Rajas con Crema

The rajas mixture itself is served hot, but there are a ton of different ways to serve the mixture. If you are low carb you might want to serve it just on it’s own without any type of tortilla, and excluding the corn and mushrooms.

The recipe below serves the mixture folded into quesadillas. Here are some other suggestions for serving:

How long will the rajas mixture keep in the refrigerator?

The rajas mixture will keep in the refrigerator for up to 5 days (in an airtight container).
To reheat, place the leftovers in a skillet on the stove and heat on medium heat. You can also place them in the microwave and heat at 30-second intervals until warmed through.

How do you reheat it?

Place the leftover mixture in a skillet on the stove and heat on medium heat. Alternatively place in a microwave and heat at 30-second intervals until warmed through. The tortillas should be made fresh each time.

Can the mixture be frozen?

Not very well. The sour cream will become quite runny and break up. The vegetables will turn out quite mushy. 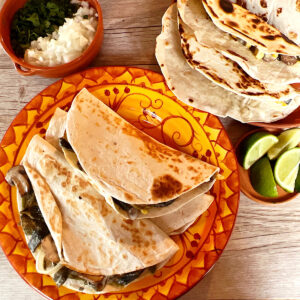 The rajas filling is made with poblanos, corn, mushrooms and crema. It is then folded in to a tortilla with melted cheese for a luscious quesadilla
5 from 1 vote
Print Recipe Pin Recipe
Prep Time 30 mins
Cook Time 20 mins
Servings 8
Calories 534

Calories: 534kcalCarbohydrates: 59gProtein: 21gFat: 26gSaturated Fat: 13gPolyunsaturated Fat: 2gMonounsaturated Fat: 4gCholesterol: 56mgSodium: 805mgPotassium: 892mgFiber: 8gSugar: 14gVitamin A: 1400IUVitamin C: 204mgCalcium: 207mgIron: 4mg
Did you make this recipe?If you tried this recipe, please give it a 5-star rating! To do this, just click on the stars above. And don’t forget to tag me at @dorothy_stainbrook_heathglen, if you share a picture on Instagram! You can also tag me at #heathglen!
Click here to cancel reply.