This robust dish of chicken, chorizo, peppers, onion and spices borrows from both Spain and France. It is a one-pot recipe made in a cast iron skillet and layers the flavors of each ingredient over each other. And….if you don’t include the rice or potatoes that often accompany it in Spain, it is compliant with a Slow Carb Diet.

Jump to: Recipe | What is Basque? | Spanish vs Mexican chorizo | Substitutions

Basque country is often said to straddle the border between Spain and France. The Basque people actually inhabited the region before those nations existed, but once Spain and France entered the picture, they brought their regional cuisines with them.

My daughter was fortunate enough to do a study abroad program in Spain, and her parents were fortunate enough to visit her and eat the wonderful dishes of the Basque region.  This Basque chicken and chorizo dish was inspired by that trip, and it turned out delicious, even though made in Minnesota!

What is Basque Cooking?

The Basque cuisine includes both a coastal influence of fish and seafood as well as a robust inland cuisine dominated by fresh and cured meats, as well as many vegetables and legumes. Both the French and Spanish influence is strong, but the classic dishes are notably different on each side of the border.

Basques have incorporated ingredients from new settlers over time, like chocolate, potatoes, and various peppers. The Espelette pepper from France is strongly associated with Basque cooking and olive oil is the predominant oil used in cooking.

This recipe for Piperade is another classic Basque dish of tomatoes, onions, and peppers that is paired with many different meats or fish.

Basically the Basque cuisine is a local cuisine which draws from a rich, fertile inland area and a distinctive coastal area. Pork, lamb, game meats and lake fish are abundant in the inland countryside and a wide range of seafood makes up the cuisine from the coastal area.

All in all, It is a very old cuisine with many traditional recipes passed down from generation to generation.

The chorizo that is typically used in this dish is Spanish chorizo—small, dense, smoked sausages made from coarsely chopped fatty pork and seasoned with mild Spanish paprika, salt and garlic. When you see the deep red chorizo in the store, that is going to be the smoky Spanish version.

Alternatively, the Mexican version is fresh, raw pork which is typically seasoned with vinegar and a variety of chile peppers. Mexican chorizo can be quite complex with the brighter spiciness of chile peppers that are not smoked.

Mexican corizo and Spanish chorizo are indeed different flavor profiles, so they aren’t truly interchangeable. They are both excellent however and if your dish calls for Spanish and all there is in the store is Mexican, use it! You will still end up with a robust flavor-filled dish.

Bell peppers native to Mexico and Central America became a classic pepper used in Spanish cuisine. The French added a different kind of pepper to Basque cooking, a pepper called piment d’Espelette, or Espelette pepper. The Espelette pepper is sweet like the bell pepper, but also has a slightly smoky taste with a bit of heat.

I have grown the Espelette pepper on our farm, but it is not easy to find in an American grocery store. A substitute for this pepper would be to use sweet paprika with a little bit of a hotter pepper like cayenne. 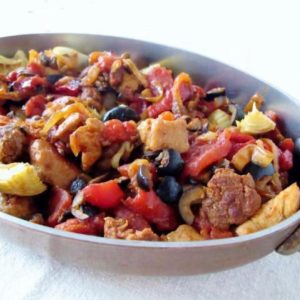 **note that cured chorizo is very different from raw chorizo.  This recipe uses raw chorizo sausage and not the cured style.

Calories: 568kcalCarbohydrates: 22gProtein: 40gFat: 33gSaturated Fat: 5gPolyunsaturated Fat: 3gMonounsaturated Fat: 18gTrans Fat: 1gCholesterol: 108mgSodium: 3459mgPotassium: 1198mgFiber: 8gSugar: 6gVitamin A: 3071IUVitamin C: 75mgCalcium: 144mgIron: 3mg
Did you make this recipe?If you tried this recipe, please give it a 5-star rating! To do this, just click on the stars above. And don’t forget to tag me at @dorothy_stainbrook_heathglen, if you share a picture on Instagram! You can also tag me at #heathglen!

Thank you for leaving a comment! It is quite helpful to know what is working and what is not.

I am making this dish today and am wondering what type of onion works best? I have yellow cooking onions, red onion and white sweet onion.

Also, is there another alcohol substitute for dry sherry? I don't have any but I do have other liquors.

@dorothy stainbrook, I made this dish and it turned out great! I used dry white vermouth in place of the dry sherry. They yellow onions were perfect. Thank you for a delicious supper!! Penny

Thank you so much for your quick reply! I will use yellow onions and dry white vermouth :)

Hi Penny, Re the onions: the yellow onion is the all-purpose onion and has a balance astringency and sweet in their flavor, becoming sweeter the longer they cook.

White onions tend to have a sharper and more pungent flavor than yellow onions. They can be cooked just like yellow onions, but they tend to be more tender and so work well raw in things like salsas and chutneys.

Bottom line: any of the onions would work, but I’d go with the all-purpose yellow onions.

Re the dry sherry: you can sub in white vermouth or a dry white wine and it will be just fine.

This dish was very good. However was way too spicy hot. My husband who loves basque food couldn’t even eat that much of it. I cut the red pepper flakes by half also. Is there something I can next time to lower the heat of this dish without sacrificing the flavor?