Camarão na Moranga (Shrimp in Pumpkin) is a creamy seafood stew from Brazil beautifully served in a colorful pumpkin. Traditionally it would be served in a pinkish heirloom variety of pumpkin called Moranga (see photo below). If you can’t find this variety however, an orange baking pumpkin will work just fine. The flavor and the presentation will definitely impress any and all guests!

Jump to: The RECIPE | Substitutions | A Little History

Camarão na moranga (“Shrimp in pumpkin”) is a typical dish of the Brazilian coast. Both delicious and impressive for special occasions, it is a traditional showpiece for celebrations.

Typically seen at Brazilian dinner parties, Christmas and New Year’s feasts, birthdays, and anniversaries, ”shrimp in pumpkin” makes a stand-out centerpiece for a fancy dinner table. It is one of the most delightful ways to serve a crowd.

Substitutions for the pumpkin

There is an heirloom squash from Brazil that was named specifically to highlight this “shrimp in a pumpkin” dish. The Brazilian Moranga squash (sometimes referred to as a pink pumpkin) is ribbed, light pink to salmon in color and weighs in at about 4-8 pounds.

The incredibly sweet, savory flavor makes it a favorite for all kinds of squash recipes. Here is a photo….

the Moranga Winter squash variety isn’t always easy to find, but there are plenty of pumpkins or Winter squash that can be effectively used for this dish.

For taste purposes, opt for a squash that has a creamy, sweet taste, like pie pumpkins or some of the sweet heirloom varieties.

For presentation purposes, opt for an orange or brightly colored pumpkin that will highlight the somewhat creamy tan color of the filling.

A deep orange pumpkin that is around 3 lbs with ribs is a good option. The photo below is a French heirloom squash called Rouge Vif d’Etampes.

Another option if you are making this for dinner guests is to use small mini-pumpkins that arrive in supermarkets in the holiday season. They make beautiful individual dishes for Fall gatherings.

One of those, filled with shrimp and sauce is just perfect for one person. The traditional version of Camarão na Moranga (Shrimp in Pumpkin) however, uses a large pumpkin to serve the entire party.

Substitutions for the Cheese

A typical Brazilian ingredient for this dish is requeijão , which is a creamy cheese.

The type of requeijão used in Brazil, Catipury,  is not found in most U.S. supermarkets however. Instead, either mascarpone cheese or cream cheese makes a great substitute.

The recipe, it seems, was invented around 1945 in Ubatuba, a town along the northern coast of state of São Paulo.

The ancients say that on an island in Ubatuba, there was a pumpkin plantation, and at high tide one of the pumpkins ended up in the sea. A few days later, the pumpkin appeared on the beach, full of shrimp inside.

A cook who had a trade in the place saw the scene and a short time later the dish was created, which became a success: a pumpkin stuffed with shrimp in a sauce.

For over 20 years the Colony of Fishermen “Z-23” have organized an important Brazilian coastal cooking festival in the Fall.

It is called A Festa do Camaro na Moranga, and the money raised from the party goes to benefits for the fishermen and subsistence of the Colony of Fishermen Z-23.

It is a great opportunity to try the countless versions of this wonderful dish if you happen to be visiting Brazil at the right time.

Don’t forget to roast the pumpkin seeds with your favorite spices for a healthy snack that can be stored year-round.

Other great pumpkin recipes for Fall include:

Recipe for Brazilian Shrimps in Pumpkins 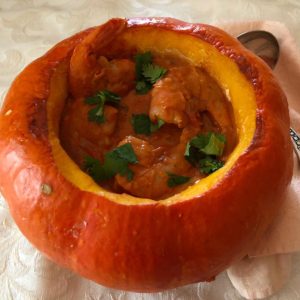 This is a popular Brazilian dish often served in restaurants along the coast, or as celebrations for guests. It is a show stopper in terms of presentation and flavor both!
4.91 from 11 votes
Print Recipe Pin Recipe
Prep Time 30 mins
Cook Time 20 mins
Servings 8
Calories 412
Author Dorothy Stainbrook

*The recipe calls for requeijao cremoso, a creamy cheese not available in the United States. Cream cheese is a reasonable substitute. * Serving size includes 4-5 shrimp per person

Calories: 412kcalCarbohydrates: 16gProtein: 30gFat: 26gSaturated Fat: 16gCholesterol: 339mgSodium: 1094mgPotassium: 883mgFiber: 1gSugar: 7gVitamin A: 15371IUVitamin C: 25mgCalcium: 295mgIron: 5mg
Did you make this recipe?If you tried this recipe, please give it a 5-star rating! To do this, just click on the stars above. And don’t forget to tag me at @dorothy_stainbrook_heathglen, if you share a picture on Instagram! You can also tag me at #heathglen!

This is a wonderful dish that is not difficult and always inspires compliments when served to company. But please note that the squash should be cooked at 375-400 oF unless you are very patient. This must be a typo; it would take forever to cook at 300 oF. Also note that cooking time for the squash varies a lot depending on its size. A small pie pumpkin should cook in about 45 min but my 10 lb moranga took nearly 2 hours. To time it with the arrival of my company I kept testing it for softness and when close I dropped the oven temp to 225 to keep it warm without overcooking. Cook too long and the squash will collapse. I also like using pie pumpkins or kabocha squash as they are smaller and you can then make individual pumpkins for everyone. Enjoy... this is a great dish.

Great comments Nathaniel. Thank you. This Fall when I make this again, I will take your comments into consideration. The recipe as-is worked for me, but I did have a friend that made it and it collapsed for her. So, I’ll give it another test this Fall.