Pumpkin whoopie pies are an easy cake-like treat, generally made with cream cheese filling. This recipe amps it up a notch by adding chai spices to the filling and making the pumpkin cookie with browned butter.

Jump to: Recipe | What is a Whoopie Pie? | Chai Filling | Substitutions

Where Does the Name “Whoopie Pie“ Come From?

Whoopie pies are a distinctly American treat. Oddly, even though the recipe appears to be originally Amish, this little treasure is a quintessentially Maine treat.

It appears they were first sold in Lewiston, Maine at Labadie’s Bakery; however, their popularity spread and soon they were produced at other bakeries throughout New England.

These delights are certainly beloved by children. The folklore is that when children are about to be served the pies they holler, “Whoopie!” Hence the name Whoopie Pies.

But it’s not just children who want to bolt these down, adults find them to be irresistible too. In fact, in Western Pennsylvania another name for this dessert is “Gobs,” possibly because everyone can’t wait to gobble them up.

What Exactly is a Whoopie Pie?

A whoopie pie is not really a pie at all, actually it’s the furthest thing from it. Whoopie pies are more like a sandwich cookie.

Typically, there are two sizable dome-shaped cookies that have a generous amount of stuffing sandwiched between them.

When true to the “original” version, these cookies are chocolate, domed, soft, and rather cakelike in texture.

When they were first produced, whoopie pies were unusually large, possibly accounting for the “pie” portion of their name.

It would not have been uncommon to have a whoopie pie be so large that it would require both hands to pick up or to be so colossal it could easily be cut in half and still have portions large enough for two.

The original whoopie pies had a marshmallow-like filling and that is what many traditional recipes still call for today. Making a fluffy marshmallow filling from scratch is always a choice of course, but it can tend to be fussy.

In the 1930s a retail version of marshmallow filling called Marshmallow Fluff became widely available. This allowed cooks to skip the step of making the stuffing for Whoopie Pies and just scoop it directly from a can.

Marshmallow Fluff is still widely available throughout New England to this day and is one of the first choices for those making the traditional chocolate version of Whoopie Pies.

Over time other types of fillings have become acceptable for this dessert, including different variations of buttercream, swiss meringue buttercream, and cream cheese frostings.

The most commonly used, next to the marshmallow filling, is a plain cream cheese frosting. I like the cream cheese filling the best, so I used that filling as the base and added the chai spices to enhance it even further.

A hot cup of coffee or herbal tea is a perfect accompaniment to these sweet treats.

It is becoming quite tiring to see pumpkin pie spice thrown into every product under the sun as soon as August is over.

Not only can you get edible items like macaroni and cheese, hamburgers, or potato chips with pumpkin pie spicing, no, it gets crazier with shampoo and non-edibles.

Now, please don’t misunderstand me. I LOVE pumpkin. And cooking with pumpkin really does signal crisp fall days and snuggling up by a firepit on a chilly autumn evening with friends or family.

So, let’s get into the autumnal spirit! Rather that forcing pumpkin ”flavoring” into bizarre product combinations, let me share a scrumptious recipe that uses real pumpkin combined with the whole spices typical to chai tea.

Pumpkin and chai spice flavors are a match made in heaven. The recipe below uses that flavor pairing to make the best whoopie pies you’ll ever lay lip to!

As noted above, traditional whoopie pies are chocolate flavored. While that’s lovely, in the fall you want your nose and palate to be in sync with the colorful visual cues of the season. Enter the Pumpkin Whoopie Pie.

This dessert’s color, its texture and the sweet spice aroma all scream AUTUMN. It is enhanced with traditional chai spices, including cardamom, vanilla, cinnamon, cloves and ginger.

These spices add warmth, making it the perfect comfort food for a cool Fall morning.

The browned butter in this recipe is a simple step that elevates your at-home cooking to that of the most elegant restaurants. It enhances the flavor of the cookie by giving it a slightly nutty flavor.

I make the cookie part with a baking soda-vinegar-milk mixture. This makes the cookie lighter, as pumpkin can be fairly dense.

TIP: These are a wonderful treat for any holiday dinner. Make the cookies in advance, but do not stuff them. Let them cool sufficiently and then freeze them. When you are ready to use them, thaw them and add the stuffing. 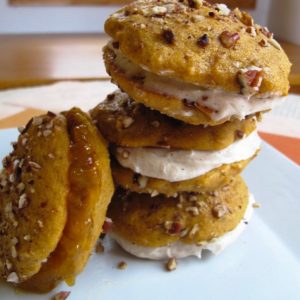 Calories: 634kcalCarbohydrates: 79gProtein: 6gFat: 34gSaturated Fat: 17gCholesterol: 102mgSodium: 455mgPotassium: 237mgFiber: 2gSugar: 57gVitamin A: 4103IUVitamin C: 1mgCalcium: 93mgIron: 2mg
Did you make this recipe?If you tried this recipe, please give it a 5-star rating! To do this, just click on the stars above. And don’t forget to tag me at @dorothy_stainbrook_heathglen, if you share a picture on Instagram! You can also tag me at #heathglen!

I hate to brag, but I was lucky enough to eat one of these and they are as delicious as they look. Thanks, Dorothy - what a splendid fall treat!

Thanks so much Cyndy. I am so glad you liked it! If I get around to making another batch for my son that didn't get any, I'll bring one with the other filling for you to try.