This is truly a unique taste treat that will surprise and delight you.  The heirloom tomatoes cook in the caramel until tender, but they manage to retain their fresh tomato flavor at the same time.  Combine that with a sweet crunchy pastry crust and it is the essence of a delicious, special Summer dessert!

Is This Dessert Easy or Difficult?

There is really only one thing that is difficult about this dessert, and that is the part where you flip the pan and the tart releases easily and comes out perfect. I have made this recipe three times so far. One of the three was perfect, and the other two had a few tears in the crust.

I have to say however, that the “taste” of all three was absolutely perfect in every way. Sweet with a hint of savory, a caramelized but flaky crust to die for, and the surprise factor of tomatoes as a dessert (they are fruits after all).

Part of the reason the flip was difficult for me is that a cast iron skillet is heavy and doesn’t lend itself to easy flipping. I think next time I try this dessert I will use a lighter stainless steel pan. The key is to make sure you have loosened the crust from the sides of the pan, as the caramelization can seep through and make the stick to the pan.

Other than the “flip”, this recipe is quite easy. Just spread butter and sugar over the bottom of the pan, add the tomatoes on top and cook for 20 minutes. The puff pastry dough is store bought and doesn’t require any rolling. It is the perfect size and it is easy enough to pick up and place over the tomatoes without tearing.

The ingredient list is pretty simple: tomatoes, butter, sugar, puff pastry and vanilla. You could add your favorite herbs to the dessert or you could add a little balsamic vinegar along with the vanilla. Both would be delightful.

I used an heirloom Roma tomato called “Opalka” as it is my favorite heirloom tomato for cooking. It is very meaty with few seeds but I think it has much more flavor than typical Roma types. You could use slicer tomatoes also, but cut them pretty thick if you do. 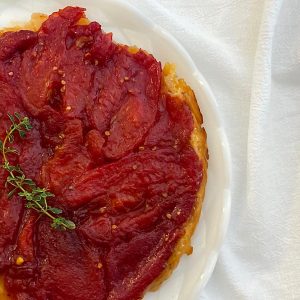 Calories: 302kcalCarbohydrates: 37gProtein: 3gFat: 16gSaturated Fat: 6gCholesterol: 11mgSodium: 83mgPotassium: 287mgFiber: 2gSugar: 22gVitamin A: 1078IUVitamin C: 16mgCalcium: 16mgIron: 1mg
Did you make this recipe?If you tried this recipe, please give it a 5-star rating! To do this, just click on the stars above. And don’t forget to tag me at @dorothy_stainbrook_heathglen, if you share a picture on Instagram! You can also tag me at #heathglen!

As heirloom tomatoes are one of our market crops at the farm, you can find a huge range of tomato recipes here, from fresh salads to Fall stews.