An heirloom tomato crostata (aka glaette) is a beautiful, savory way to enjoy the waning days of Summer. The crust is an easy biscuit dough, but if you want truly quick and easy, pick up some store-bought pastry dough. Just be sure and use the tastiest, freshest tomatoes available, heirloom tomatoes if possible.

Crostata vs Galette vs Tart

The terms crostata and a galette are often used interchangeably to describe a rustic, freeform tart which is made with either a sweet or savory filling. Crostata refers to the Italian version of this dish, whereas galette is the French version.

A tart (or pie) generally is made in a pie shell with sides giving it some structure, whereas a crostata or galette is baked flat on parchment paper atop a cookie sheet or sheet pan.

The crostata/galette dough is folded up around the filling so that it holds itself together, resulting in a rustic, uneven crust. This is ofter referred to as a “pleated” crust. This method of making a crust means every crostata will look a bit different, which is part of the charm.

The filling itself can be sweet or savory — such as fruit tossed with a bit of sugar, or tomatoes paired with cheese and herbs (like the recipe below). My favorite food memory in Denver, Colorado is a sweet plum crostata I got at a farmers’ market. Yum!

Tips for Success (and Mistakes to Avoid)

While crostatas are rustic and will taste great no matter what they look like, it’s always fun to make your dishes beautiful also. Here’s a few tips: 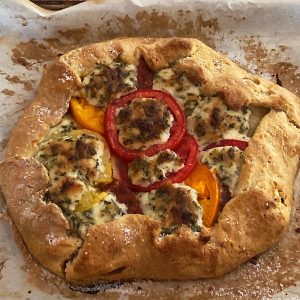 Calories: 347kcalCarbohydrates: 28gProtein: 7gFat: 24gSaturated Fat: 11gCholesterol: 48mgSodium: 367mgPotassium: 405mgFiber: 2gSugar: 4gVitamin A: 1215IUVitamin C: 12mgCalcium: 161mgIron: 2mg
Did you make this recipe?If you tried this recipe, please give it a 5-star rating! To do this, just click on the stars above. And don’t forget to tag me at @dorothy_stainbrook_heathglen, if you share a picture on Instagram! You can also tag me at #heathglen!

If you’re a fan of growing your own tomatoes, check out some of these detailed posts on how to grow your own food, whether in a pot, a greenhouse or a garden.