My favorite thing to do with the end-of-season fresh corn on the cob is to make a seafood corn chowder. Using fresh stock is a game changer in terms of true corn flavor. The milk sugar from the corn cobs is so sweet there is no need for any added sugar in this recipe.

Table of Contents: The Recipe | How to Make Corn Stock | Ingredients & Substitutions | What to Serve with Chowder | Common Questions

What is a Seafood Chowder vs Seafood Stew

A “chowder” typically includes some sort of milk, cream or dairy in the broth and it usually includes potatoes. A “corn chowder” adds the flavor of corn through either a corn stock made with the cobs or the corn kernels used mashed or whole. And then the “seafood corn chowder” adds a layer of fish or shellfish. Most often you will see a seafood chowder featuring shrimp.

A seafood stew on the other hand, is often made with a clear broth instead of a cream-based broth. A San Francisco cioppino or a French bouillibaisse are two popular seafood stews that have distinctive ingredients. Seafood stews often include tomatoes, with potatoes not always a common ingredient.

How to Make the Corn Stock

The best stock is made with fresh cobs, stripped of their kernels. This really highlights the corn flavor and helps to thicken the soup at the same time. The recipe below and the video show you exactly how to make the stock. It is easy, but you have to think ahead a bit as it takes a couple of hours to extract the full flavor and milk sugar from the cobs.

Of course fresh corn on the cob is not always available and you can make corn chowder with frozen or canned corn, but the corn flavor will be more muted.

Frozen corn is often frozen when at its peak so it does work in a corn chowder. You can add some creamed corn to make up some texture and flavor differences you would get from not using fresh corn.

You could also use a mixture of canned corn kernels and creamed corn, but I think frozen corn will add more fresh flavor.

Pureeing some of the frozen or canned corn kernels to stir into the simmering soup will also help deepen the corn flavor.

The ingredients of any chowder tend to cover a wide range of variables. Most however, will include a protein (fish or meat), some sort of dairy or nut milk, and potatoes mixed with other vegetables. Here are my favorite substitutions:

Best Way to Remove Kernels from the Cobs

Typically you stand the corn on end and use a sharp knife to scrape off the fresh kernels from the cob. The only problem with this is that it is very messy….kernels tend to fly all over.

While seafood is always low carb, corn and potatoes definitely are not. Since corn and potatoes make up a large percentage of this dish it is not really compliant with a low carb diet. Check out the cioppino or bouillabaisse recipe for low carb seafood stews.

What to Serve with Seafood Corn Chowder?

For ease and convenience, oyster crackers are a classic accompaniment to chowders. If you want serve something homemade with it, try these easy, but classy cheese straws. Here are a few other ideas:

Can it be frozen?

due to the dairy and potatoes in this one, I don’t recommend freezing it as is.  the stock made with fresh corn cobs however can be frozen and when thawed will add a huge burst of fresh flavor to canned corn kernels. Store the stock in the refrigerator for up to 1 week or freeze in small batches and thaw as needed.

Fresh corn on the cob has been hybridized to be very sweet these days. If you make stock out of the cobs it will release the milk sugar and the corn chowder will be quite sweet without the need to add any sugar.

How can I make corn chowder thicker?


Several ways:
1) you can puree the corn kernels in the blender and add to soup instead of whole kernels;
2) you can whisk together a bit of cornstarch and whatever milk you are using and add that to the soup while it cooks;
3) you can add a paste of equal parts softened butter and flour thoroughly mixed and add this to the final stages of cooking the soup.
4) if you use the cobs to make the stock it will often act as a thickener. 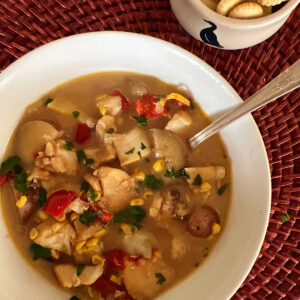 Storing and Freezing: Can be refrigerated for 3 days. The corn stock and corn kernels can be made ahead and frozen, but the potatoes and cream in the chowder will not freeze well.

Calories: 333kcalCarbohydrates: 28gProtein: 28gFat: 13gSaturated Fat: 8gPolyunsaturated Fat: 1gMonounsaturated Fat: 3gTrans Fat: 0.1gCholesterol: 106mgSodium: 1096mgPotassium: 956mgFiber: 4gSugar: 7gVitamin A: 1535IUVitamin C: 56mgCalcium: 73mgIron: 2mg
Did you make this recipe?If you tried this recipe, please give it a 5-star rating! To do this, just click on the stars above. And don’t forget to tag me at @dorothy_stainbrook_heathglen, if you share a picture on Instagram! You can also tag me at #heathglen!
Click here to cancel reply.