Spanish Cod al Pil Pil is typically made by cooking skin-on salt cod in a garlic-infused oil. The protein left over from the cod is then whisked until it is emulsified into a semi-thick sauce. The recipe below uses fresh or frozen cod rather than salt cod (bacalao), as it is not always easy to find salt cod.

Jump to: Recipe | What is Pil Pil | Fresh vs Frozen Fish | How to Emulsify Sauce | Serving Suggestions

What is Pil Pil Sauce?

Pil Pil sauce is typically made with skin-on salt cod (bacalao), lots of garlic, lots of olive oil, and a little bit of spice (or herbs). The garlic is sauteed until golden and then removed.

The fish is then cooked very briefly in the garlic oil and removed. At this point the garlic and spices are added back in and the oil is whisked vigorously, sometimes for up to 10 minutes, until emulsified to the desired thickness.

I used skinless frozen cod, which I thawed, dried and salted. I let the salted cod sit for 20 minutes before cooking, and did not rinse the salt off prior to cooking.

I was worried the lack of skin would not allow the garlic oil to emulsify. It worked however! It might not have been as thick as if I had used skin-on salt cod, but that was not readily available in my region.

You should be able to know whether it will emulsify if you see dollops of milky white protein traces left behind in the oil once the fish is removed.

If you are using salt cod, you need to freshen it up for 24 to 48 hours before you make the pil pil sauce. You do that by soaking the block of salted fish in cold water, changing the water every eight hours or thereabouts.

The flavor of the garlic-infused oil (the pil pil) is just as good with fresh fish or frozen fish, but it does help quicken the emulsification if you can use skin-on cod. The collagen from the skin aids the emulsification process.

How to Emulsify the Sauce:

As noted above, using skin-on cod will help speed up emulsification due to the amount of collagen and protein.

Emulsification primarily depends on how thick you want your sauce. I prefer a thinner sauce, but some cooks emulsify to the thickness of a mayonnaise.

For some reason the chefs in the videos use a sifter to whisk the oil, I don’t know why. I used a small wire whisk and it seemed to work fine.

** Pro Tips for a Thicker Sauce:

If you prefer a thicker sauce and cannot get it to thicken with a whisk, here are some things to try:

What does Pil Pil mean?

The name “pil-pil” is said to come from the sound the oil makes as it bubbles up to the surface. You have to boil the oil very slowly until you see the bubbles and hear the sound.

Other Uses for Pil Pil Sauce

The sauce invariably accompanies seafood. Although cod or halibut is the traditional way to get the emulsified pil pil sauce, I have seen recipes for tapas using prawns or scallops.

With the recipes that use scallops and/or prawns, the sauce is often thin and is more of a garlic-infused oil rather than an emulsification

What to Serve with Cod al Pil Pil

My favorite thing to serve this with is crusty bread. It is perfect for sopping up the wonderful sauce. Bread is not low carb, of course, but the rest of the dish is.

Wine pairing: a refreshing fruity off-dry Riesling is great with the robustness of the chile peppers and the garlic. 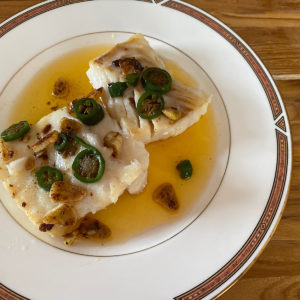 Calories: 367kcalCarbohydrates: 2gProtein: 1gFat: 41gSaturated Fat: 6gPolyunsaturated Fat: 4gMonounsaturated Fat: 30gCholesterol: 1mgSodium: 3491mgPotassium: 32mgFiber: 1gSugar: 1gVitamin A: 39IUVitamin C: 6mgCalcium: 12mgIron: 1mg
Did you make this recipe?If you tried this recipe, please give it a 5-star rating! To do this, just click on the stars above. And don’t forget to tag me at @dorothy_stainbrook_heathglen, if you share a picture on Instagram! You can also tag me at #heathglen!
Click here to cancel reply.