Ferragosto is an Italian national holiday where the Italians escape the dog days of August and take a rest from the labor of the harvest season.  It is a family holiday rivaled only by Christmas, and many Italians head for the beach for a week of relaxation, friends and good food.  Watermelon often plays a starring role and these 2 recipes highlight watermelon drinks at their finest.

A (little) History of Ferragosto:

The Italian festival called Ferragosto is celebrated on 15th August which dates back originally to the Romans.  Ferragosto was later incorporated into the Catholic faith, and then tweaked even later by Fascism and today is a relevant part of  popular Italian culture.

The ancient Roman Ferragosto was linked to the Consualia, effectively incorporating August festivities in Italy which celebrated the harvest to provide a suitable period of rest, necessary after the hard labour of the previous weeks.

The Catholic Church then added a celebration of the Assumption of the Blessed Virgin Mary (the elevation of her sinless soul and incorruptible body into Heaven), to the Ferragosto holiday.

Somewhere around the second half of the 1920s, the Fascist leisure organizations set up the “People’s Trains of Ferragosto” where the train fares were discounted enough that it gave less well-off social classes an opportunity to travel.  It was during these “people’s trips” that the majority of Italian families had, for the first time, the chance to reach seaside and mountain resorts, as well as see art in Italian cities.  The discounted offer was limited to 13, 14 and 15 of August, and consisted of  two options: the “One-Day Trip”, within a radius of 50 to 100 kilometers or the “Three-Day Trip” within a radius of about 100–200 kilometers.

Today, Ferragosto is still honored, primarily as a feast day and a holiday to escape the heat.  Most Italians take at least a short holiday, if not the whole month of August, and head to the beach or the mountains for family time and parties.

My research did not uncover any particular dish that was traditionally associated with Ferragosto.  All of the available photography however, included watermelon, so that is what I went with for our Ferragosto celebration.

Apparently restaurants in Southern California celebrate the holiday with a full Porcetta roast.  Sounds like a plan for next year’s celebration. 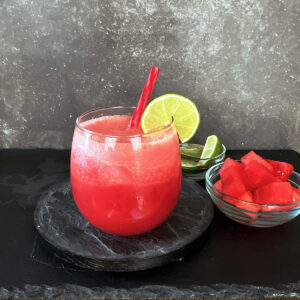 Watermelon is the star in these two cooling Summer drinks. One is a non-alcohol aqua fresca and one is spiked with rum and Limoncello.
5 from 1 vote
Print Recipe Pin Recipe
Prep Time 10 mins
Cook Time 0 mins
Servings 4
Calories 99

**Note: A variation would be to add 1/4 cup of mint to the blender along with the other ingredients. **if you keep it in the fridge, it may separate a bit so be sure to stir well before serving.

Calories: 99kcalCarbohydrates: 26gProtein: 1gFat: 0.3gSaturated Fat: 0.03gPolyunsaturated Fat: 0.1gMonounsaturated Fat: 0.1gSodium: 3mgPotassium: 188mgFiber: 1gSugar: 22gVitamin A: 873IUVitamin C: 17mgCalcium: 17mgIron: 0.5mg
Did you make this recipe?If you tried this recipe, please give it a 5-star rating! To do this, just click on the stars above. And don’t forget to tag me at @dorothy_stainbrook_heathglen, if you share a picture on Instagram! You can also tag me at #heathglen!
Click here to cancel reply.

[…] heat).  For a great watermelon mojito to pair with some of the Italian appetizers click here:  Ferragosto post. […]

Summer Appetizers off the Grill - Farm to Jar Food

[…] these appetizers with friends and family at your summer picnic accompanied by a Watermelon Limoncello Mojito. […]