Borscht is a sour soup common in Eastern Europe. There are a lot of variations to the tart soup known as borscht, but probably the most popular is the Ukrainian version made with red beetroots as one of the main ingredients, which give the dish its distinctive red color.

Borscht may be served either hot or cold, and it may range from a hearty one-pot meal to a clear broth or a smooth drink. I liked this soup best at room temperature, as chilling food masks some of the flavor of foods in my opinion.

It is frequently served with sour cream and/or potatoes.

I had recently bought some golden beets at the farmers’ market, so I made the soup with those rather than red beets.  Golden beets are a little milder than red beets, and I think next time I make this I would use red beetroot for a more intense color and flavor.

Ukrainian borscht is typically made by combining meat or bone stock with sauteed vegetables. Here are some common variations:

I’ve never really cared much for beets on their own, but really enjoyed them in this soup.  My husband thought it was a bit bland so I might add a little more cumin or other spices next time.

Is Borscht Healthy or Low Carb?

Most root vegetables are not low carb, and beets are no exception. Tomatoes also include a healthy does of fruit sugar, so I would not call borscht low carb. “Healthy” however is very descriptive of borscht!

The specific health metrics depends on which version of borscht you make. If you use meat or a meat stock, it will be packed with protein. Beets are high in iron, carrot and tomatoes are high in vitamin C, potassium and vitamin B6, and cabbage is great for fiber vitamin K & C.

How to Peel and Grate Beets:

Can you freeze borscht?

Borscht freezes exceptionally well. To freeze, allow your soup to cool and store it in a glass mason jar. Be sure to leave an inch or two for expansion. When you’re ready, simply defrost borscht in the refrigerator and heat in a pot. 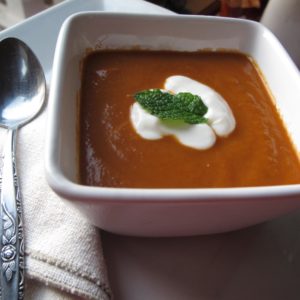 For the best, most flavorful results, toast whole cumin seeds in a dry frying pan over medium heat for a few minutes until golden and aromatic. Grind to a powder and use immediately.

Calories: 125kcalCarbohydrates: 14gProtein: 3gFat: 7gSaturated Fat: 1gPolyunsaturated Fat: 1gMonounsaturated Fat: 5gSodium: 765mgPotassium: 515mgFiber: 3gSugar: 9gVitamin A: 1062IUVitamin C: 24mgCalcium: 31mgIron: 1mg
Did you make this recipe?If you tried this recipe, please give it a 5-star rating! To do this, just click on the stars above. And don’t forget to tag me at @dorothy_stainbrook_heathglen, if you share a picture on Instagram! You can also tag me at #heathglen!
Click here to cancel reply.