This crisp, tart Jicama tomatillo slaw is a great side dish for many Mexican or Caribbean dishes or as a compliment to Summer dinners. It’s basically a fresh, “chopped salad” made with sweet crunchy jicama, tart tomatillos and granny smith apples, dressed with a creamy dressing of jerk aoili.

Jicama is a root vegetable that looks similar to a turnip or rutabga but is sweeter and is most often served raw. The flavor is sometimes likened to a cross between a water chestnut and an apple.

It is pronounced (HEE-kah-ma), and is native to Mexico. In Central America, jicama is often sold by street vendors as a raw snack seasoned with a chile lime powder.

In Mediterranean cultures, a traditional aioli refers to an emulsified sauce made from olive oil and mashed garlic and salt.

This traditional aioli sauce is fairly time intensive to make, and over time it has morphed into a spread or a dip with mayonnaise as the base. Often it will still include mashed garlic, but it can be found with any number of creative seasoning mixes.

You can spice it up with hot chile peppers, warm ginger, umami fish sauce, etc. In the recipe below I have added a jerk seasoning blend which turned out really nice. I also tried it with a chile-lime salt (Tajin), which was a brighter taste but equally delightful.

Aioli is used to enhance all kinds of food, but is commonly used as a spread for breads, a dip for fries, or a drizzle over vegetables. In this case I used it as a dressing for the jicama slaw and as a spread on a fish sandwich. Talk about versatile!

6 Great Ways to Use Jicama

Jicama is pretty versatile due to its mild flavor and satisfying crunch. It lends itself to a wide array of snacks, side dishes and toppings. Here are a few of my favorite uses:

Where can you Grow Jicama?

Jicama is commercially grown in Puerto Rico, Hawaii, and Mexico and in some warmer areas of the southwest United States. It is sensitive to frost and does best in warm climates with a medium amount of rain.

The vines of the plant can grow up to 20 feet in length, but the leaves and seeds are actually toxic. The root is the only edible portion of the entire plant.

All of the jicama found in US markets is produced in Mexico. There has been some interest in producing it in California, but hasn’t been very successful. Many of the efforts in California resulted in luxurious vine growth with prolific flowering, but with low quality fibrous taproots.

Although quite popular in Mexican and Caribbean cuisine, in the United States jicama is less common and may intimidate home cooks who’ve never tried it.

To prep, remove the tough brown skin using a sharp paring knife or a vegetable peeler. The skin is pretty fibrous and can get matted up in the vegetable peeler, so I cut off both ends of the jicama off, as that is the most fibrous part.

Then cut the white flesh into cubes or strips (often referred to as matchsticks) with a sharp knife. Unlike many vegetables, jicama does not brown or become soggy after cutting.

While it is popular to serve this crisp vegetable raw with a dip or in a salad, you can also use quick-cooking methods that allow jicama to keep its crispness (like indoor grilling or stir-frying).

You can usually find jicama in the produce section of most supermarkets and in Latin American markets. Select firm, dry jicama roots. The skin should not appear shriveled, bruised, or blemished.

Jicama should stay fresh for about two weeks when stored in the refrigerator. Cover any exposed areas with plastic wrap to minimize air exposure.

Is Jicama Low Carb or Healthy?

With respect to health, jicama is rich with a prebiotic called inulin, which is a benefit to gut health. It is also rich in Vitamin C and Vitamin A, and is often referred to as one of the “superfoods”.

Most root vegetables are starchy and are not “low carb” if you are counting the overall amount of carbs. The amount of fiber in root vegetables (and in jicama) however, mitigates the impact of the carbs in relation to glycemic response.

The following nutrition information is provided by the USDA for 1 cup (120g) of raw jicama slices.

Because of the high fiber content in jicama, it is considered a low glycemic food. The glycemic load of this vegetable is approximately 10. A glycemic load of less than 10 is thought to have little effect on blood glucose response.

Naturally low in calories at 25 calories per ½ cup serving, jicama is also fat free, low in sodium, and a superb source of fiber.

For other recipes using a jerk seasoning mix, check out this chicken sheet pan dinner or this creole jambalaya. 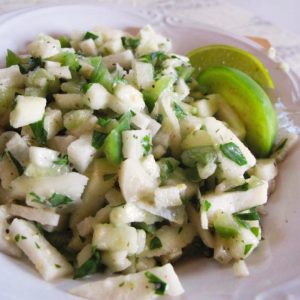 This crisp, tart salad is a perfect side dish to most Mexican dishes, and is a great topping for a fish sandwich or as a stand-alone summer lunch
5 from 2 votes
Print Recipe Pin Recipe
Prep Time 20 mins
Servings 6
Calories 70
Author dorothy stainbrook

Calories: 70kcalCarbohydrates: 17gProtein: 1gFat: 1gSaturated Fat: 1gSodium: 203mgPotassium: 292mgFiber: 7gSugar: 6gVitamin A: 167IUVitamin C: 31mgCalcium: 24mgIron: 1mg
Did you make this recipe?If you tried this recipe, please give it a 5-star rating! To do this, just click on the stars above. And don’t forget to tag me at @dorothy_stainbrook_heathglen, if you share a picture on Instagram! You can also tag me at #heathglen!

Dorothy, for the better part of 62 years, I have rarely missed any single opportunity to satiate one of the fundamental aspects of my existence - an inner need to constantly diversify, experiment and broaden my experiences regarding my interaction with the culinary realm. In other words, I will try anything, especially foods from other cultures. I was a 'foodie' before it became cool. As long as I can remember, this is an inherent personality-shaping quality in me. Simultaneously, I harbor a strong drive to learn everything I can about peoples of the world with all of its vast diversity. Born white, male, middle class, and reared in Oklahoma, I was able at a young age to see many manifestations of racial inequality. And I also could hear the narrow-minded opinions of some adults in my immediate circle, which apparently motivated my desire to grow into a man that meets and greets each person as an equal, simply because we are both persons. In today's pandemic environment, I sense conditions are currently aligning themselves, so that soon one or more huge strides in the advancement of the civilization of mankind may be possible. My point here is: I was a non-racist before that was cool, too. After all, I wanted to try soul food, too! So, enough of my introduction. I was a virgin until I met you in your blog. I mean, when it comes to Jicama, I was. I was so excited to finally know a way to eat Jicama, I made your Jicama-Tomatillo slaw within 36 hours of watching your video. I suppose it would be an exaggeration to say it filled a void in my life. Besides, saying that raises the valid question of why I never just Googled it before. I did take a liberty with the recipe by using two apples. Your recipe resulted in a wonderful salad with a superb balance of tart vs sweet, and of crunchy vs mushy. I enjoyed it very much. I rarely post a comment, and even rarer do I award 5 stars, but since the only other comment on this recipe is dated from 2012, I figured what the hell and did it anyway. It's funny, I made the salad knowing I would like it. I knew there was no reason I would not like it: I am predisposed to have a strongly-favorable opinion on any offering from woman whose requisite farm tour toolkit is a large, full wine goblet! From the southern end of the great plains to the northern, thank you for the recipe. Your friend, Art Karatzou

Wow, that is quite a review, and I thank you for the kind words and taking the time to write your thoughts. I am going to change the recipe based on your recommendation to add two apples. I thought the same thing while I was making it this time, so you just confirmed it! Thanks for watching the videos also. Much appreciated......take care.

This looks great, I'm definitely going to make it! I'm off on a short research trip tomorrow so it will be a while but I certainly want to try this before the heirloom tomato season is over.