Looking for something different for your next family dinner or gathering with friends? Farm to Jar’s resident expert on everything Spanish, Maria, has an idea for you: a traditional Spanish seafood paella. It’s easier to make than you think and the perfect summer food for a crowd!

Table of Contents: Recipe | What is it? | ”Types” of Spanish Paellas | Ingredients and Substitutions | Traditional Spanish Rice Dishes | Common Questions

What is “authentic” Spanish paella?

Paella (pronounced pai·ay·uh) is a typical Spanish rice dish that originates from the Valencian region on the country’s Mediterranean east coast. The name of the dish refers to the pan that paella is typically prepared in, which is large and shallow, with handles on each side.

In Spain, and particularly around Valencia, paella is part of the local culture. The tourism sector has made it so that pretty much every restaurant on the coast serves paellas of varying qualities, but let me tell you a little secret…

The best paella is had at home with friends or family! It’s considered a lunch dish, maybe something for a Sunday afternoon: a dish that brings everyone together. Having it for dinner is seen as blasphemy, by the way, but if you are not in Spain, I do think we can bend the rules a little.

There are a few differences between an authentic Spanish paella and the “Americanized” version you’ll often see referenced in online recipes. For starters, you’ll want to use an open fire, although a gas stove will do in a pinch.

You don’t use regular rice, but rather a type that’s referred to as “arroz bomba” in Spain, which I’ll tell you more about in a bit. There’s no wine involved like in risotto, and no boneless meat please! The bones are where all the flavor is.

Let’s have a look at where paella came from, as well as the different types that you may encounter in Spain (and that you can consider making at home!). After that, I’ll share my tried and true authentic recipe for Spanish seafood paella for a crowd.

A short history of paella

Like many typical Spanish dishes, paella originated as food for the working class. It all started with the introduction of rice from Asia to Spain, around the time of Alexander the Great. The Spanish mastered the growing of rice throughout the centuries, especially during the time the country was under Arab rule.

When 15th-century Valencian farmers and shepherds were in need of an easy meal that could sustain them from lunch all the way to the end of the work day, they went for the logical option: rice.

This rice was mixed with whatever vegetables and meat or fish they would have on hand at the time. It was quickly realized rice is fantastic at soaking up the flavor of stock and whatever else it’s cooked with, an advantage that ensured it slowly but surely became ingrained in Spanish culture.

Eventually, and inevitably, paella made its way to the USA and beyond during the 20th century. The tourism boom in Spain in the 1960s sealed the deal: everyone has now at least heard of paella, although not everyone has had the pleasure of trying an authentic one.

By the way, touristy restaurants in Spain are notorious for serving terrible paellas!

Although paella started out as a “whatever” dish, with field workers tossing in anything they had on hand, set recipes have now long been established. There are three basic paella recipes, as well as a bunch of other arroces (rice dishes), which are prepared in a similar manner but don’t carry the official name.

As with all traditional Spanish dishes (lookin’ at you, gazpacho!), the ingredients for paella are subject to some internal dispute. Everyone’s family makes it slightly differently. However, there are some basics that all Spaniards agree on, and woe unto you if you dare to change the recipe!

Let’s have a look at the different types of paella you can try, as well as some of the other common arroces.

They all use saffron as a typical coloring/flavoring and can be finished off with a squeeze of fresh lemon.

Funnily enough, a habit I’ve seen in the Alicante region, close to Valencia, is to also serve paella with aioli (garlic mayo). I’m not sure if the Valencians themselves would agree with that, though!

Here are some photos of each type of paella made on our outdoor hob:

Tried all three of the traditional paella varieties and still hungry for more? Fear not! There are endless rice dishes to try that are prepared similarly, with a range of different ingredients.

Because paella traveled around the world and back in the 20th century, the definition has become a bit muddled for many people. Let’s have a look at some common questions for those looking to make a real, traditional Spanish paella!

What kind of rice should you use for paella?

Move over basmati and jasmin! Paella is made with typical Spanish rice called “arroz bomba”, which is similar in appearance to risotto rice. This is a short-grain rice variety that can absorb a lot of liquid without losing its structure and without sticking. It’s sometimes sold as “Valencian rice” in the US.

Socarrat is your new best friend, and also the reason paella can’t be made in the oven as some recipes suggest. It refers to that beautiful layer of slightly burned rice at the bottom of the paella pan: toasted, crispy and delicious.

I’ll give some tips on obtaining this holy grail of paella in the recipe at the bottom of this article.

What fish is best for Spanish seafood paella?

This is gonna crack you up… you don’t actually use fish in a traditional Spanish seafood paella! The ingredients are limited to squid or cuttlefish, and shellfish like shrimp, scampi, mussels and/or clams.

If you want to make a traditional Spanish rice dish with fish, you can try arroz del senyoret, which is usually made with monkfish (although any firm white fish should be fine).

What size pan is needed for a party?

Paella is not a dish you eat alone. The more, the merrier, although remember, a bigger crowd means a bigger pan will be needed. If you wonder how large your paella pan (paellera) should be, here are some diameters you could go by:

If you’re wondering whether you can use something other than a traditional paellera, the answer is yes. Just don’t go for a non-stick pan – that would make it impossible to get a nice socarrat. A normal stainless steel skillet works, although you’ll have to find a big one if you want to feed a crowd.

Did you know? The biggest paella ever was made in 2001, in a pan that was 21 meters (almost 70ft) wide. It contained an entire kilo of saffron!

How to make a traditional Spanish seafood paella

Let’s dive into how to make a traditional Spanish seafood paella (better known as paella de mariscos) at home! This is the perfect dish for a crowd.

I’ve been living in Spain for over 4 years and my friends and I get together for a paella cookout at least every few months. Serve some wine and appetizers, play some music and get cooking. Everyone can help.

We make our paella outdoors using a special gas burner with a large ring that can fit our XL paellera. If you’re planning on making this dish regularly, it’s an absolute lifesaver!

However, you can also make yours on a charcoal barbecue or even over a campfire. Even your regular stove works, although you may have to get a large ring or rotate the pan regularly so everything cooks evenly.

In the recipe below, I’ll tell you how to make a traditional Valencian seafood paella. Since some ingredients may be a little more difficult to find in the US, I’ll also list a few substitutes for those who don’t feel the need to follow the traditional recipe to the letter.

Please don’t tell the Valencians that I did, though: they take the traditions extremely seriously. You won’t find peas or chorizo in this one, as that might get me hate mail.

Here’s what you’re going to need:

You can include other seafood that you like (I have seen arroces with lobster, for example), but these are the classics. If you want to turn your dish into a paella mixta, you can also add some chicken legs. Just treat those like you do the seafood during the preparation.

Enjoy the fruits of your labor!

Does Valencian seafood paella have chorizo?

Your Spanish seafood paella will taste fine with chorizo, but it would absolutely not be traditional anymore. Just think back to when Jamie Oliver’s website published a recipe for paella with chicken and chorizo: half of Spain jumped on the internet to yell at him!

What do you serve with seafood paella?

Spanish seafood paella will go well with white wine and some nice (garlic) bread. As I mentioned earlier, some Spaniards will eat it with aioli.

How long will it last in the fridge?

In an airtight container, paella will last 3-4 days. If you won’t be able to finish it all, just freeze it! Paella freezes very well and will last for months.

Good saffron is so expensive. Does paella have to have it?

You’re not the only one who has asked this question. Spaniards have clearly dealt with the same issue, because a look at the spices for sale in Spanish supermarkets will reveal something called paella seasoning. This gives paella its typical yellow coloring without the saffron. There are also paella seasonings that do contain some saffron, but are still cheaper than buying this precious spice outright. 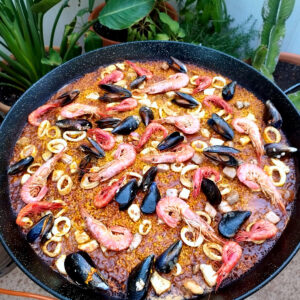 Calories: 783kcalCarbohydrates: 82gProtein: 36gFat: 33gSaturated Fat: 6gPolyunsaturated Fat: 9gMonounsaturated Fat: 16gTrans Fat: 0.1gCholesterol: 109mgSodium: 1438mgPotassium: 946mgFiber: 3gSugar: 2gVitamin A: 1516IUVitamin C: 12mgCalcium: 180mgIron: 4mg
Did you make this recipe?If you tried this recipe, please give it a 5-star rating! To do this, just click on the stars above. And don’t forget to tag me at @dorothy_stainbrook_heathglen, if you share a picture on Instagram! You can also tag me at #heathglen!
Click here to cancel reply.